The 36th and final chapter of the Shakugan no Shana X: Eternal Song manga series.

The Divine Summoning of Alastor ended Asiz's struggle and the Great War. The survivors reflected on what had been lost with their own resolutions.

Ullikummi and Alraune watched the flames at the top of the mountain and the flies of Sabaeru Kaze in the sky disappearing all at once. Ullikummi ordered Alraune to instruct their army to change course, but not to the fortress, as Alraune had thought. He wanted the troops to go to Bal Masqué and ask their rear guard, "Thousand Changes" Sydonay, to take them in, after which "Arbiter of Reverse Reasoning" Bel Peol would be their new leader. Ullikummi believed there was no point in going to help their master; the Grand Scheme was finished and no one could defeat the True Demon God of the Crimson Realm. He couldn't believe that the Divine Summoning had been used in this world.

Ullikummi stated that he would hold his ground until his comrades had escaped. The battle was over; the Flame Haze would attack in great numbers after seeing Alastor's Manifestation, and Ullikummi would sacrifice himself to save his comrades. Just as he had thought, he could see the "Braider of Trembling Might" rapidly approaching from a distance. As he gathered a wave of Iron Hammer of Nesa with his injured right arm, he told Alraune to retreat as well, but she wanted to stay with him. Ullikummi shielded Alraune and fired his wave at Sophie, who smashed into the wave with her Thunderbolt Kick. After his right arm broke off, Ullikummi readied another wave with his other arm, while Sophie kept pushing with her attack. 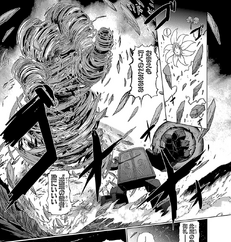 Ullikummi readying a wave of Iron Hammer of Nesa. 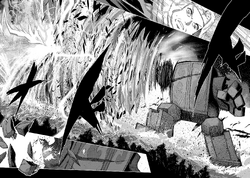 The clash between Ullikummi and Sophie.

In the crimson flames, Mathilde's weapons and dress had melted away, but she no longer felt any pain. Even though Mathilde had consented to this, Alastor was saddened and expressed that he finally understood what Asiz had been feeling. Mathilde teased him and said that his resolution and determination weren't so weak that they would be washed away by his feelings for one woman. Mathilde did think it was unfortunate as she was a "good woman", but Alastor was the only man whose heart she felt was connected to hers. Therefore, she was happy to die for him and thanked him for going along with her for her miserable revenge. Mathilde told Alastor something she had never said before but was nevertheless obvious; that she loved him. Alastor didn't think of her revenge as miserable, but splendid to the point that he admired her. Mathilde wanted Alastor to remember her not for dying for her revenge, but for using all her strength out of respect for his resolution, and for being happy. She kissed the ring of flames on her finger and said goodbye, proclaiming her love for him once again.

The Manifestation of Alastor.

An eruption of flames burst from Brocken Mountain; Alastor had fully manifested. Asiz also manifested, lamenting about Alastor having thrown away his irreplaceable love, and how the two had not chosen a path where they could live together. Alastor stated that he and Mathilde were living together at that moment, and he wanted Asiz to bear witness to his woman, Mathilde's way of life. He punched Asiz through the chest and crushed the crystallization of what was to become the Heir to Both Worlds, the Unrestricted Spell Insignias of "Disintegration" and "Fixation" and Tis' coffin, which Asiz had kept together, affixed to him. 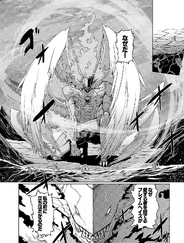 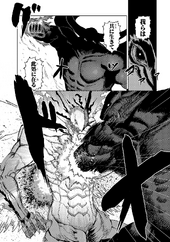 Alastor punching Asiz through the chest.

Hecate suddenly cried out in pain and collapsed. Bel Peol used Tartaros to cut off Hecate's resonance. Hecate was weak but still breathing. Bel Peol was glad that Sydonay had been out taking in Töten Glocke troops and had not been present to see Hecate's current state, as there was no telling what he would do in his rage, and he could have possibly put Bel Peol's life in danger. Hecate confirmed to Bel Peol that the Psalm of the Grand Order had been broken. Bel Peol was in disbelief; even if it was just a fragment, it was a Perfect Insignia created by the God of Creation, meaning that if it was carved onto something, it couldn't be broken. Bal Masqué had come to the battlefield so that Hecate could destroy the fragment by resonating with it, as she possessed the original insignia. However, Alastor had just destroyed it with one attack, proving his divinity. Fortunately, Töten Glocke hadn't investigated where the insignia had come from, and it was good that Bal Masqué were able to observe that Alastor could destroy it. Bel Peol wanted to have Decarabia observe the Nachtigall girl in order to use her in the future. She ordered Gaap to send a message to Sydonay that Bal Masqué would cease taking in Töten Glocke remnants and would leave the battlefield.

Inside Alastor, Mathilde began to sing a love song to him. Asiz healed the hole in his chest, asking what way of life there was in death. Alastor argued that it was the same for Asiz; his contractor's way of life was still with him. Alastor shot a fireball from his mouth. Asiz's powers couldn't stop it, and his arm was blown off by the blast. 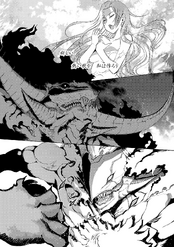 Mathilde singing to Alastor during the battle. 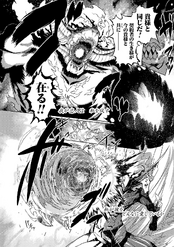 What was with Asiz, however, was Tis' death. She had killed Denizens for the humans, but they had simply used her and killed her. Asiz emerged from the explosion and struck Alastor's torso with his horns, which he had enlarged, but they were ineffectual. As he regenerated his arm and horns, Asiz continued, saying that he had made living with Tis his sole wish, and if the laws of the world forbade it, he would change the laws themselves. He and his followers were to resound in a new world and send off the old world's laws; therefore, they would be a Töten Glocke. Asiz got up again and sent a massive blast at Alastor, but he simply walked through it, unfazed. 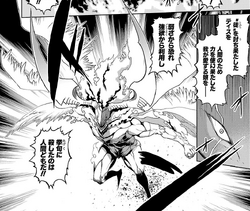 Asiz attacking with his horns. 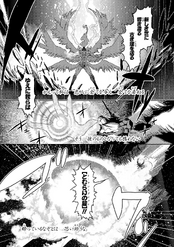 Alastor respected Asiz's spirit, calling him not "Abyssal Ring" but his preferred "Weaver of Coffins" for the first time, but he stated that the world's laws would not allow such a mistake to be made. For Asiz, his love was no mistake. The two gathered their power and fired massive blasts from their mouths. The crimson and blue flames clashed, and the crimson flames were victorious. Asiz saw a vision of Tis holding a child as he was extinguished. Mathilde's song became inaudible as she too faded away. 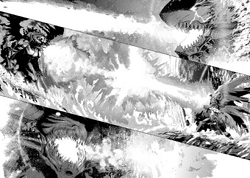 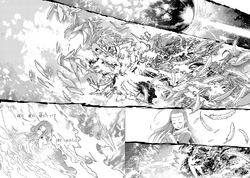 The deaths of Asiz and Mathilde.

The massive explosion which signified the end of the battle was seen by all present on the war's battlefield, including Sophie, who had just destroyed Ullikummi, Wilhelmina and Merihim inside Tendōkyū, who grieved for Mathilde and also Asiz in Merihim's case, and the retreating Trinity. Alastor stood alone in a sea of flames. Sophie read a letter addressed to her from Wilhelmina, which detailed the coming efforts of rearing the next Flame-Haired Burning-Eyed Hunter" and Merihim's involvement, and she decided to keep that information to herself. She lamented how powerless everyone was that that was all they could do for Mathilde. Takemikazuchi voiced that they had won the war, and Sophie thought of all the lives, both allies and enemies, that had been lost. Denis, Alex, and François came and informed her that François had detected a storm approaching, which would help their efforts in getting rid of traces of the war. Sophie knew that Alastor would one day appear before them again with a new Flame Haze and looked forward to it. 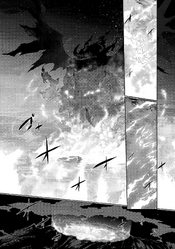 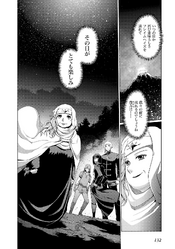 Leanan-sidhe approached Alastor and thanked him and Mathilde for enlightening her and setting her on her path. She informed him that she would go to her loved one and would find a way for herself from now on. Before leaving, Leanan-sidhe wished to meet Alastor again, at the Crossroads of Destiny.

Alastor remembered the time when Mathilde had first sang the love song to him. She had asked for his opinion, but he couldn't answer her properly. The song, which she had rewritten, had embarrassing lyrics but it was magical because it allowed her to easily express her true feelings to Alastor, which she had usually hidden.

Alastor dispersed his body until only the black mass he had within him was left, and descended into Tendōkyū. Inside Tendōkyū, Wilhelmina tried to help Merihim up, but he told her not to touch him. They were there simply to grant Mathilde's wishes; that was the only reason they were together. To protect his promise to Mathilde to never devour humans, he scaled down his Manifestation to one which could only move around, that of a skeleton. Wilhelmina muttered that she detested him. The small black mass settled into Caina and Tendōkyū lifted into the sky, bits of the cracked Crypta falling as it ascended. 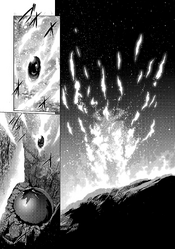 Alastor dispersing into the black mass and heading for Tendōkyū. 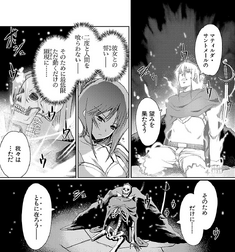 Merihim's Manifestation scaling down to a skeleton.

In the present, Wilhelmina was walking through a city with someone, who had asked her if she knew any songs, as she hadn't taught them any. Wilhelmina saw a vision of Mathilde, who smiled at her. An old song came to mind and she sang it in the presence of the pendant Cocytus. She was still with them, and her song continued to resonate, deep within their hearts, forever.

Along with their feelings, the days flowed on.
Connecting the time, of oneself, and someone.
The world, as their everything, headed for the future.

Retrieved from "https://shakugan.fandom.com/wiki/Shakugan_no_Shana_X:_Eternal_Song_Manga_Final_Chapter?oldid=34530"
Community content is available under CC-BY-SA unless otherwise noted.