The 34th chapter of the Shakugan no Shana X: Eternal Song manga series.

Wilhelmina volunteered to lead the effort to raise Mathilde's successor. Mathilde said farewell to Wilhelmina and went to Asiz.

Wilhelmina had joined Mathilde's ascent towards the main tower of Brocken Fortress. Both she and the Knights protected Mathilde, who had thought Wilhelmina would try and stop her. Wilhelmina knew that if she stopped Mathilde, Töten Glocke would have their way, and Mathilde herself would struggle to escape and would die anyway from her wounds. Therefore, Wilhelmina had chosen to instead go with her and follow the same path. Mathilde suddenly dispelled the horse they were riding on and stated that only she and Alastor would keep going. There was no longer any point in going together.

Mathilde talked about keeping Merihim alive and believed he would keep her promises, and she reiterated that their target was Asiz. Wilhelmina pointed out Mathilde referring to both of them together even though Mathilde was going to leave her and go die by herself, but Mathilde didn't think of it as going to die, rather that her life of running through obstacles would come to an end. The cleanup of this, the next "Flame-Haired Burning-Eyes", was already asked of Merihim. Wilhelmina stated that she would lead the effort to raise Mathilde's successor, which surprised Mathilde. Wilhelmina correctly assumed that Mathilde had not left any specific instructions for Merihim and thought there was no one more suitable than her for the effort. Mathilde agreed to it.

Mathilde talked about how Alastor was strict to others but was actually very nice, and that what would happen to her wouldn't dishearten him or make him give up. Mathilde tasked Wilhelmina with finding a perfect Flame Haze suitable for him, the last wish of a woman who would leave her man behind, and she embraced Wilhelmina.

Wilhelmina recalled her first meeting with Mathilde, clashing with each other during a battle against Crimson Denizens, and the two having an argument over her feelings for Merihim. She remembered all the times they had been together. As Wilhelmina was going to hug her back, Mathilde pushed her away. Mathilde said farewell to Wilhelmina and Tiamat and wished them peerless fortune. She flew up to the main tower, leaving Wilhelmina in her grief. 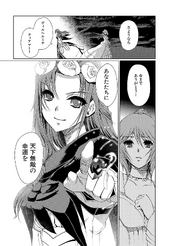 "Goodbye, Wilhelmina, Tiamat. Thank you for everything. I wish you peerless fortune." 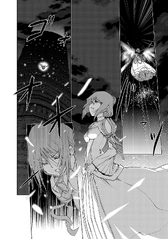 As the Heir to Both Worlds was being formed, Mathilde descended from the hole that had been opened in the main tower's ceiling and landed on one of the plates of the Nine Eternal Divine Scales. Mathilde delivered Gavida's message to the girl inside Nachtigall; "Donato told me, 'I painted a picture of you.'", and after hearing it, the girl's left eye regained its vigor. The girl remembered a time when Donato had begun a painting, but hadn't wanted to tell her what it was of. She had then said it didn't matter because he wasn't good at painting. Asiz stated that it was no use as Nachtigall was completely under his control. Mathilde added that the message was only in exchange for Gavida taking her to the battlefield with Tendōkyū, and she wasn't obligated to do anything else. She would even destroy the girl if it meant Asiz's scheme was stopped. Mathilde introduced herself to Asiz as the one who would put an end to his immoral madness. 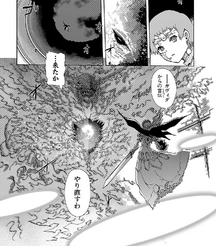 Retrieved from "https://shakugan.fandom.com/wiki/Shakugan_no_Shana_X:_Eternal_Song_Manga_Chapter_34?oldid=34244"
Community content is available under CC-BY-SA unless otherwise noted.