The 31st chapter of the Shakugan no Shana X: Eternal Song manga series.

Slowly, Merihim figured out what Mathilde planned to do.

Merihim recognized Mathilde's expression; he had seen the same one on a Flame Haze he had defeated in the past. It signaled the final useless struggle of a deep friendship between a Flame Haze and their contracted Crimson Lord. With their contractor dead, the Lord chooses not to return to the Crimson Realm and manifests in this world from the contract that had bound them. They then fought until they ran out of Power of Existence and perished. That Flame Haze had done so, but it had been in vain.

However, the manifestation may not even work in Mathilde's case because "Flame of Heaven" was a True God of the Crimson Realm; his existence was too great. It may not even work and may only bring about one instant for an attack; they couldn't possibly kill Asiz, who harbored a vast amount of Power of Existence gained from City Devourer. If that was Mathilde's final hope and trump card, she was beyond mad.

Merihim then thought that Mathilde and Alastor would sacrifice themselves together out of love for each other. Merihim angrily but logically protested, but Mathilde wanted to continue her request to him, which had been interrupted by Chernobog. She had 3 promises for him to keep; don't devour any more humans, don't cause any more trouble for the world, and to train the "Flame-Haired Burning-Eyed Hunter" who would appear after her the best he can, out of his love for her. Merihim was confused, as her promises meant that only she would die. Even if she didn't perform the manifestation, she would be killed by his master if she went. Merihim questioned why Mathilde didn't just kill him, which would render the first two promises unnecessary. The third promise was also very roundabout. Merihim recalled how Asiz had resummoned himself, a miracle which had only been possible because Asiz was an extraordinary Unrestricted Spell Master and there had been many humans around him at the time. Contrastingly, the God of Retribution did not excel in delicate Unrestricted Spells and there were no humans around the remote Brocken Fortress. The only thing that surrounded them were his brethren. Something in the back of Merihim's mind made him shiver.

Mathilde asked Merihim to crawl to the Tendōkyū, which was fortunately nearby. Merihim was still confused, but Mathilde tapped him on the forehead and asked him to keep the promises. Mathilde quickly manifested Yogasa and a shield and sword and blocked an attack from a Denizen. They were surrounded by the surviving defensive troops which Chernobog had previously gathered up, and Mathilde praised Töten Glocke's competency. Mathilde could no longer swing a sword, but summoned a troop of lancer Knights. Merihim didn't know how she was mustering this strength, considering her fatigue and wounds, and thought she was whittling something vital away. 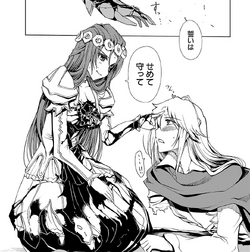 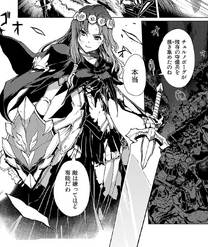 Merihim again tried to persuade Mathilde not to go, as she couldn't fight, but Mathilde stated that she only needed to get herself, a vessel, to Asiz. Merihim finally figured it out and was in disbelief that Mathilde would perform the ritual in this world, which was unthinkable. He couldn't accept it, as it would mean the death of his master, the destruction of his master's desire, and the death of Mathilde. As Mathilde began to say her parting words to him, Merihim pleaded with her, but she wouldn't stop. She made her Knights destroy the bedrock they were standing on. Merihim called out to her as he fell, while Mathilde said goodbye to him and flew to the central tower of the fortress on her steed.

Retrieved from "https://shakugan.fandom.com/wiki/Shakugan_no_Shana_X:_Eternal_Song_Manga_Chapter_31?oldid=34201"
Community content is available under CC-BY-SA unless otherwise noted.