The 30th chapter of the Shakugan no Shana X: Eternal Song manga series.

As the black hand slithered away, Mathilde's blood spewed through the air, some of it splashing on Merihim's face. Wilhelmina caught Mathilde in her arms and was horrified at how light Mathilde was. Mathilde's lightness was nothing like when Wilhelmina had dealt with her while she was drunk, dragged her through battles, held her back from making detours, fought with her, and helped her up. Wilhelmina felt that her friend's life was fading away, being taken away by the black hand. She placed Mathilde on the ground and turned to face the assailant, the smiling Chernobog. 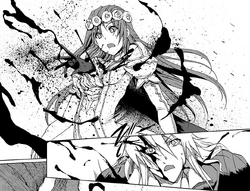 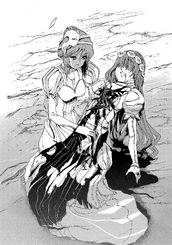 Wanting her friend's life back, Wilhelmina leaped at Chernobog. She flung her ribbons all around her, which broke up the land they stood on, but Chernobog dodged them. She sent more ribbons at Chernobog, who dodged them while closing in. 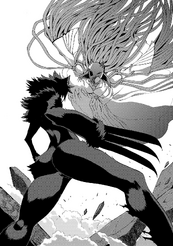 Chernobog nimbly got behind Wilhelmina, dodged a strike, and pierced her shoulder. Wilhelmina quickly used her ribbons to tie up the arm which had struck her, but Chernobog elongated that arm in order to bring Wilhelmina closer and kicked her, using spikes grown from her foot to split the ribbons Wilhelmina had used to block the kick. The result was an explosion in Wilhelmina's face, which further damaged her Persona to the point that it was unwearable, and Chernobog hit her away with her claw. Looking at Chernobog's crazed expression, Wilhelmina thought it was like a mask, a fake expression to hide her true emotions, thus being similar to Wilhelmina herself.

Mathilde awoke in a pool of her own blood, with Merihim trembling next to her. Now there was no more "just in case"; she had no choice anymore. She had had no clue of the attack and praised Chernobog. If Mathilde had been human, she'd have died instantly, but Flame Haze were tough. Mathilde told Alastor that she would go. Despite the blood gushing from her chest, Mathilde stood, and Merihim demanded to know what she was doing. However, Mathilde looked back at him with an expression of determination. From her expression, Merihim believed that she would try to manifest Alastor after her death. He argued that she would die just to summon the Demon God for an instant, an act which had no meaning and would be in vain.

Retrieved from "https://shakugan.fandom.com/wiki/Shakugan_no_Shana_X:_Eternal_Song_Manga_Chapter_30?oldid=34166"
Community content is available under CC-BY-SA unless otherwise noted.