The 29th chapter of the Shakugan no Shana X: Eternal Song manga series.

Mathilde emerged victorious over Merihim, with both being saved by Wilhelmina.

The final clash between Mathilde and Merihim caused the tower to collapse. As the two fell, a ribbon caught Mathilde, and a second one was sent after Merihim. Wilhelmina and Mathilde landed on a part of the mountain which had escaped destruction, with Mathilde having a fresh cut on her shoulder. Both were heavily injured and Tiamat joked that they were only light injuries, though her own Persona was half-broken. As Mathilde stood, her armor broke apart. Wilhelmina used her ribbons to instantly clean Mathilde up, bandage her, and fit her in a new dress. 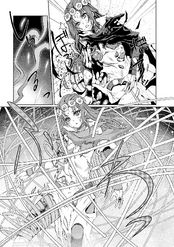 Mathilde's armor breaking and her body being wrapped by bandages. 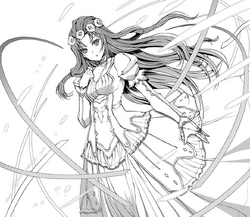 Lying next to Mathilde was the defeated Merihim, his left arm being his only remaining limb. Mathilde mentioned a big job waiting for her which infuriated Merihim, as it was impossible for her to fight his master in her current state. The Flame Haze were surprised by his lack of composure as he pleaded with Mathilde to not go and get herself killed. Merihim stated that he and his master were different from Alastor, who was driving her to her death. Asiz had experienced the cruel mission of the Flame Haze and would accept her. Merihim wanted Mathilde to choose to be with him; he would protect her, and as long as there was love they could push through anything. 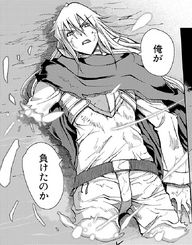 Mathilde stated that Merihim had misunderstood her; she was moving forward by her own volition. She knew what awaited her, and she knew it was hard for Alastor and that he had no choice, but she would do it anyway. Merihim's love couldn't stop her, which meant she had turned him down. Merihim was shocked but accepted her words.

Mathilde brought up Merihim's own condition for their battle; the winner could do what they wanted with the loser. She thought to herself that she would get Merihim's cooperation in the future, just in case something happened, and that she wanted Wilhelmina to benefit as well. She hoped that Wilhelmina wouldn't get mad. Mathilde began by saying she wanted Wilhelmina and Merihim to do something together, and Wilhelmina blushed heavily as she suspected what Mathilde would say, while Merihim was simply confused. However, Mathilde didn't get to finish, as she was impaled from behind by a black, stakelike hand. 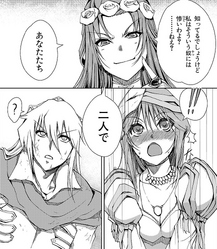 Wilhelmina and Merihim listening to Mathilde. 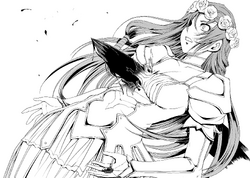 Mathilde impaled from behind.

Retrieved from "https://shakugan.fandom.com/wiki/Shakugan_no_Shana_X:_Eternal_Song_Manga_Chapter_29?oldid=34154"
Community content is available under CC-BY-SA unless otherwise noted.