The 26th chapter of the Shakugan no Shana X: Eternal Song manga series.

Though Mathilde was hurt, she and Wilhelmina implemented their plan.

Though in pain from the Rainbow's Heaven Sword blast, Mathilde realized that Merihim had reflected it back at her with an Aeria Rinne. Merihim had previously deployed many of them in the skies to reflect and alter his Rainbow's Heaven Sword attacks, though they were all thought to have been destroyed in the Nachtigall Struggle five days ago. Mathilde realized that Merihim had hidden one, either a survivor or a newly made one, just for that one attack. Merihim was annoyed that Mathilde had been able to dodge his surprise attack, and he and Illuyanka charged at the two Flame Haze. Mathilde thought that getting hurt was advantageous; because Wilhelmina was with her, the "Pair of Wings" wouldn't carelessly use Rainbow's Heaven Sword and Wall of Miasmal Screen and would instead come closer to finish her. When they had gotten close, Mathilde summoned an army of lancer Knights. The two Crimson Lords easily dealt with the army and continued their approach. 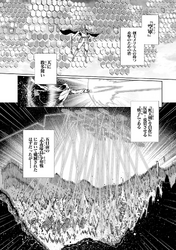 Merihim using Aeria in the past. 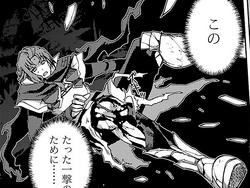 Wilhelmina used all her ribbons she had laid out to wrap up and throw Illuyanka, causing Merihim to be flung off his head. Illuyanka suspected that Knights had been deployed to hide the ribbons. However, just throwing him around would have no meaning, as his tough body and Wall of Miasmal Screen meant he wouldn't get hurt.

Wilhelmina couldn't let Illuyanka figure out her plan, and because her throw had given him too much airtime, she bounded him further and kicked him from above. The kick was not enough to hurt Illuyanka, and he believed that that wasn't her plan. He saw a fortress spire beneath him which had been strengthened and made sharper with ribbons. The kick was to accelerate his descent towards the spire. With not enough time to use Wall of Miasmal Screen, Illuyanka was skewered by the spire. 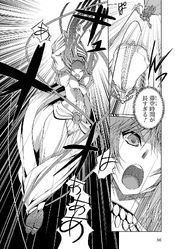 Wilhelmina about to kick Illuyanka. 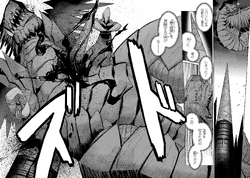 Retrieved from "https://shakugan.fandom.com/wiki/Shakugan_no_Shana_X:_Eternal_Song_Manga_Chapter_26?oldid=34119"
Community content is available under CC-BY-SA unless otherwise noted.