The 25th chapter of the Shakugan no Shana X: Eternal Song manga series.

Hecate continued analysis of the Psalm of the Grand Order portion used by Asiz. Both Mathilde and Wilhelmina and the "Pair of Wings" were preparing to finish their battle.

Merihim pushed Mathilde away and prepared to strike with Rainbow's Heaven Sword, but Mathilde simply smiled and Merihim was forced to stop. While battling Wilhelmina, Illuyanka also had to swallow his own Wall of Miasmal Screen attack. Every time the "Pair of Wings" were about to use their decisive attacks, the two Flame Haze moved in front of the main tower of Brocken Fortress, where Asiz was, effectively sealing their attacks from being used. The combatants were now high in the sky, but Illuyanka thought it was advantageous for the "Pair of Wings". They rose to the same altitude as the Flame Haze and prepared their next attack. Mathilde thought that they would be unable to use the tower as a shield any longer. Wilhelmina had made preparations for their own attack and needed Mathilde to create a disturbance. Mathilde summoned lancer Knights and noted that she had already used her full power before to destroy Labyrinthos. Alastor warned her to be careful, as the "Pair of Wings" were preparing a big attack. Mathilde saw Wilhelmina's preparations, ribbons around mountains and spires surrounding the main tower, and believed that one side would settle the battle soon. Wilhelmina and Tiamat were adamant that it would be them. 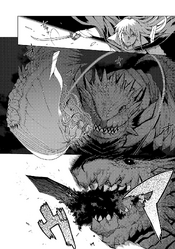 The four combatants at the same high altitude near the main tower of Brocken Fortress.

As Nachtigall continued to use the ancient Unrestricted Spell on Asiz and Tis, Asiz could feel their existences unraveling and becoming threads, swirling in a double helix. Their existences were being converted into two character strings which were merging into a large flame above the vertical line of Tis, the metal plate, and Asiz. The flame began to beat, like a heart. However, Asiz believed it was still not enough to interweave the Heir to Both Worlds. 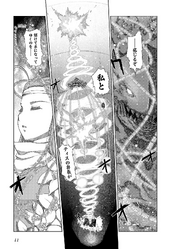 The vertical line of the flame, Asiz, the metal plate, and Tis.

The string of characters comprising the double helix.

Analyzing the portion of the Psalm of the Grand Order spell being activated with Trigon, Hecate used the triangles formed from Trigon's analysis to form a 3D model of the spell insignia. She figured out that the portion was an insignia to temporarily "disintegrate" existences, but it was a long and old-fashioned version, an excerpt from the 18th version of the 2nd layer core of the Psalm of the Grand Order. Bel Peol questioned if, given its age, it could even be used in Asiz's plan. Hecate's resonance with the Psalm was slightly off and she believed that Dantalion had altered the original insignia and experimented with it. Bel Peol was annoyed with Dantalion and wanted to chastise him when she next found him, but Hecate told her to not be too harsh on him. Bel Peol assured Hecate that she wouldn't hurt him, only make him reflect on how many of their brethren had died from this pointless turmoil that he had enabled. However, Bel Peol knew that Dantalion would have no sense of responsibility for the war. 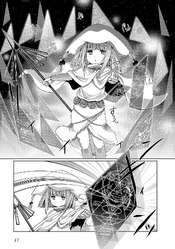 Hecate using Trigon to analyze the Psalm of the Grand Order.

The portion of the Psalm of the Grand Order which Asiz was using.

During analysis of the insignia, Dantalion had taken a portion out but had gotten interested in something else and abandoned it, a common occurrence. The portion had then fallen into Asiz's hands, and was at the core of his "Foolish Scheme". Regardless of the state of the war, Bal Masqué couldn't let anyone notice even a fragment of the Psalm of the Grand Order. Unfortunately for Asiz, they had to destroy his portion for the sake of the Grand Order. Hecate tried to resonate with the portion and destroy it with Trigon, but was unable to. She stated that there was one more portion and the deviation in her resonance was also due to the two interfering with each other. Bel Peol suggested that it may be good to hurt Dantalion for this, and Hecate couldn't defend him this time.

The usual circle of events regarding Dantalion. 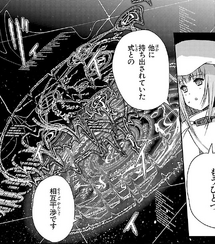 The two portions of the Psalm of the Grand Order interfering with each other.

Illuyanka charged through the lancer Knights. As the four combatants withheld their attacks and drew closer, Mathilde was tense with excitement. Mathilde and Merihim clashed swords as they passed each other. As the two Flame Haze flew down Illuyanka's side, Mathilde barely dodged his wings and tail. 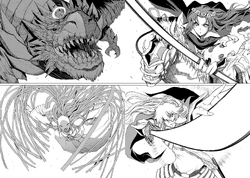 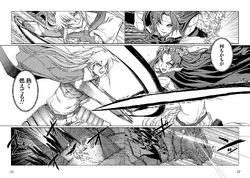 When she looked up at the "Pair of Wings", Mathilde was in disbelief that her vision was blurry and that she was out of breath due to fatigue. She thought their opponents were tiring as well. Wilhelmina and Tiamat wanted to end the battle and Mathilde agreed, as she had more to do. Mathilde was relying on Wilhelmina's winning move, and Wilhelmina also needed her to fight head-on. Mathilde told herself to forget what was to come and burn for this moment. Approaching the "Pair of Wings", she thought of Merihim as beautiful, an opponent worth burning her life for. She felt that Merihim was going to use Rainbow's Heaven Sword, but it was different somehow. Merihim fired the blast and Mathilde dodged it, but Alastor warned that the attack wasn't over. The blast reflected back from behind her and she just barely dodged a full blow, but her leg was caught in the attack. 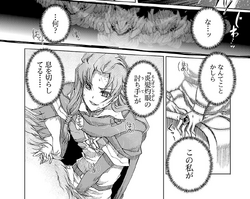 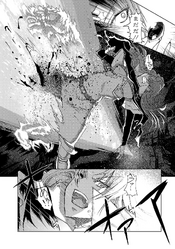 Retrieved from "https://shakugan.fandom.com/wiki/Shakugan_no_Shana_X:_Eternal_Song_Manga_Chapter_25?oldid=34187"
Community content is available under CC-BY-SA unless otherwise noted.