The 24th chapter of the Shakugan no Shana X: Eternal Song manga series.

Karl Berwald's pursuit of the retreating enemy forces had put the Flame Haze Army in disarray. The one who awaited Karl was General "Thousand Changes" Sydonay.

As Alex and Denis ran through the forest, Alex discussed the Flame Haze Army's theoretical advantage from Sokar's defeat, Mathilde's surprise attack and her success in holding back the "Pair of Wings", and the retreat of the enemy's right-flank army. However, the reality was that they were on the run from Töten Glocke's forces. Denis calmly explained that this was the result of the Berwald Group splitting up their forces too much in their pursuit of the retreating army. The central Töten Glocke army had then attacked the gap between the two Flame Haze groups, leading to the Sawallisch Group in danger of being surrounded by the left flank and central Töten Glocke armies. Alex and Denis fled with their group's maps and equipment, praising Ullikummi's tactics which had put them in that situation. Sophie came up behind them and told them to run harder as the three barely dodged a wave of Iron Hammer of Nesa. Sophie was angry at Karl for abandoning command of his troops, but Takemikazuchi pointed out that she had been the one who appointed Karl as second-in-command, and Denis and Alex blamed her as well. Alex remembered that they had sent capable Flame Haze over to assist Karl, but they hadn't been able to stop his vigor. 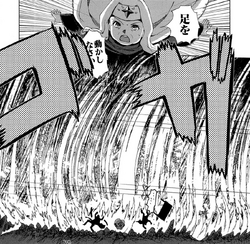 The Flame Haze barely escaping the Iron Hammer of Nesa.

Sophie announced that they would abandon coordination with the Berwald Group. Denis suggested that the whole Sawallisch Group retreat quickly, have the reserve troops battle the Crimson Denizens on their trail, and regroup and prepare to strike back. Reconstructing coordination with the Berwald Group could come after that. Sophie ordered for a messenger to be sent to the Berwald Group, with the postscript that if Karl continued to be reckless, she would go and see him. Takemikazuchi thought that if the messenger made it in time, Sophie and Karl may find a way to defeat Ullikummi.

The messenger arrived to pass on the message to Karl's adjutant, who already had an idea as to what it was about; cease pursuing the right-flank army, gather all the troops, and prepare for coordination and recommencement of offensives with the Sawallisch Group. The adjutant replied to the message's postscript, saying he would "get a hold of him". However, he was blocked from meeting up with Karl by an army of Legion soldiers.

Karl blitzed through Legion soldiers atop his arrowhead, crushing any he blew past. He noticed that his troops hadn't followed him and Outreniaia and Vetcherniaia informed him that those who had flown up with him had been devoured by Sabaeru Kaze, and the rest were having trouble with the likes of the Legion soldiers. The two Crimson Lords talked Karl up as he dived into the Legion again.

Watching Karl, Sydonay instructed his steed Orobas to let him off, saying if he used all his power while mounted on him, Orobas would be crushed. Orobas obliged, in awe at Sydonay's spear, Shintetsu Nyoi, which Sydonay was only allowed to use when carrying out the Grand Order. Sydonay complained about not being able to fight to his heart's content due to Bel Peol. Orobas retreated as Karl spotted them and Sydonay got ready for battle by putting the spear behind his back. 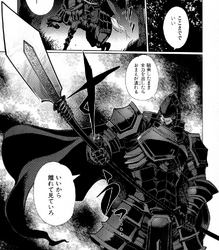 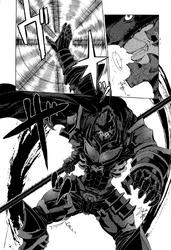 Karl's Lords warned him to be careful, as the Denizen was in the open by themselves, suggesting that they were strong, but he paid no heed and rushed at Sydonay. Karl's plan was to smash into him with Zorya, then go behind him and hit him with both Gripen's Howl and Draken's Roar. Sydonay ordered Orgon to disperse the Legion soldiers to his right. As Karl wondered what was happening, Shintetsu Nyoi appeared to his left from the vicinity where the soldiers had been, extremely enlarged, and it swatted him to the ground while he was still unaware. 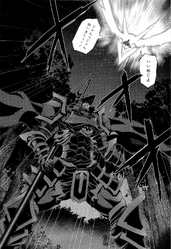 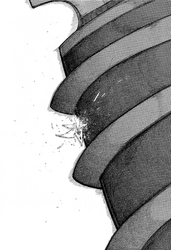 Karl swatted from the sky by Shintetsu Nyoi.
Sydonay swung the spear again, obliterating the forest where Karl had crash-landed. He transformed and flew into the sky above Karl. Though Karl was gravely injured, Sydonay recalled his acquaintance Sokar's death by Karl's hands and offered his next attack to Sokar as a tribute. As Karl tried to restart Zorya, he saw Sydonay transform Shintetsu Nyoi into a rain of gigantic spearheads which left him nowhere to run, and the rain pulverized him. The Sawallisch Group were left panicked at the destruction caused and the fact that the resulting flames were muddy purple in color. Everything had gone to Bel Peol's plan. 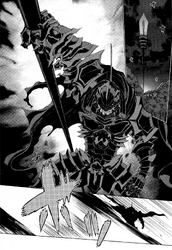 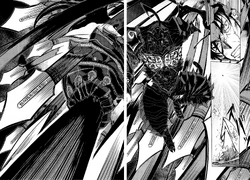 The rain of spearheads.

On the ground, Wilhelmina watched the battle between Mathilde and Merihim. She thought Merihim was detestable for only having eyes for Mathilde, but she had still chased after him to this battlefield, where neither side could give in. She remembered a time Merihim had proclaimed he would take Mathilde, and a time after a battle where Mathilde had told her that she couldn't stop, no matter the foe or the circumstances. Both knew of Wilhelmina's feelings, but wouldn't stop. Wilhelmina dodged a Wall of Miasmal Screen attack from Illuyanka. Merihim was excited by Mathilde's way of life, so Wilhelmina had to be as gallant as her. Mathilde was pushing forth to a decisive conclusion, and to stop that, Wilhelmina would have to quickly defeat both the fearsome "Pair of Wings" and Asiz. As she was faced with Illuyanka, Wilhelmina pulled down her Persona mask. She wanted Merihim's heart and to save Mathilde's life, but couldn't abandon anything to do both. 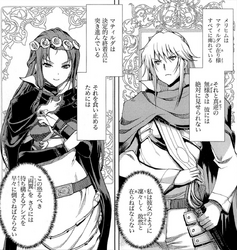 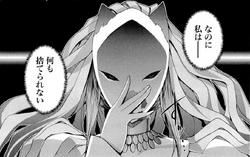 Retrieved from "https://shakugan.fandom.com/wiki/Shakugan_no_Shana_X:_Eternal_Song_Manga_Chapter_24?oldid=34089"
Community content is available under CC-BY-SA unless otherwise noted.