The 23rd chapter of the Shakugan no Shana X: Eternal Song manga series.

Hecate sensed the activation of the Psalm of the Grand Order. The battle between Mathilde and Wilhelmina and the "Pair of Wings" raged on.

As Bal Masqué was retreating from the right flank of the battlefield, Hecate felt the activation of the Psalm of the Grand Order through Trigon. Only one, limited part of it had been activated, so she couldn't tell which part it was. Sydonay believed that not even Nachtigall would be able to decipher their Psalm of the Grand Order. However, the fact was that part of it had been activated, and Hecate would continue monitoring it to figure out which part it was. Watching the battle between the "Pair of Wings" and Mathilde and Wilhelmina near Brocken Fortress, Bel Peol wished for Alastor to corner Asiz.

Bel Peol saw an arrow of light approaching and cursed Ullikummi, who had diverted the Flame Haze towards the retreating Bal Masqué. A worried Gaap appeared and informed Bel Peol of what she already knew; the right flank of the Flame Haze Army were pursuing them, the vanguard being "Archer of Aurora" Karl Berwald. Bel Peol told Sydonay that they didn't want to face the "Braider of Trembling Might" as well, and he understood what she meant; crush Karl without giving him an opportunity to meddle. Sydonay told Bel Peol to not put his Hecate in any danger, though Hecate stated that she wasn't his. Sydonay departed atop his horse. 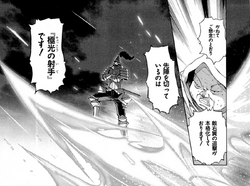 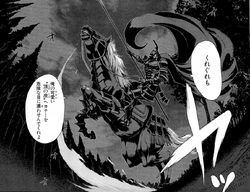 As Chernobog ran through Brocken Fortress, she remembered the opening ceremony for the fortress several hundred years ago, where Asiz and the Nine Eternal Divine Scales had all marched in a line. She recalled how Sokar had made a fuss about everyone's order in the line. Many of the Nine Eternal Divine Scales had perished, and Chernobog may soon join them, but she was prepared for that. She remembered a time she had told Molech that she liked flowers with colors to them and they had looked at a löwenzahn together. In the present, she told Molech to watch her and what she would do for their master. 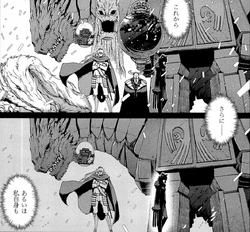 The depletion of the Nine Eternal Divine Scales. 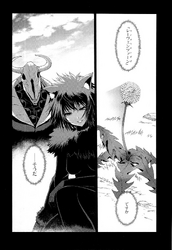 With Merihim atop him, Illuyanka pushed off the mountains. Merihim shot Rainbow's Heaven Sword, obliterating the horse Mathilde was riding through the sky with. He left Illuyanka and locked swords with Mathilde. Illuyanka tried to swallow Mathilde up in his mouth from below but was restrained by Wilhelmina's ribbons, which threw him in the opposite direction, where a net made of ribbons was waiting. Thinking he was being underestimated, Illuyanka blew the net apart with a blast of Wall of Miasmal Screen from his mouth. However, Wilhelmina had not underestimated him and used an Unrestricted Spell Insignia to explode all the scraps of ribbons around him. Wilhelmina thought the resulting explosion would slow Illuyanka down, but it didn't even do that as he emerged from the flames straight away, meaning she had in fact underestimated him. 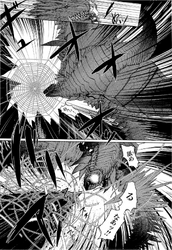 Illuyanka destroying the net of ribbons. 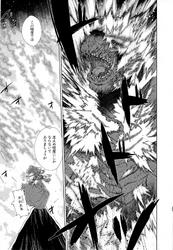 The ribbons exploding around Illuyanka.

Illuyanka knocked away more ribbons with Wall of Miasmal Screen and struck at Wilhelmina with his wing, but she blocked the blow with ribbons. The recoil sent her hurtling downwards but she used a ribbon to grab on to Illuyanka's tail as he accelerated upwards towards Mathilde and Merihim. Wilhelmina pulled herself to Illuyanka's tail and shouted "halberd" to Mathilde. Mathilde pulled away from Merihim and summoned a group of halberd-wielding Knights to engage him, and in doing so she dodged Illuyanka. While Merihim dealt with the Knights, Mathilde was pulled away by Wilhelmina's ribbon. She summoned Knights' arms with bows drawn, and they fired their arrows at Merihim. Illuyanka blocked the arrows with his wing. All four combatants thought that their opponents were strong, but still vowed to fight.

Retrieved from "https://shakugan.fandom.com/wiki/Shakugan_no_Shana_X:_Eternal_Song_Manga_Chapter_23?oldid=33865"
Community content is available under CC-BY-SA unless otherwise noted.