The 22nd chapter of the Shakugan no Shana X: Eternal Song manga series.

In Ancient Times, "Weaver of Coffins" Tis and "Abyssal Ring" Asiz were once an exemplary Flame Haze and Crimson Lord pair. However, tragedy struck them and Asiz abandoned the Flame Haze mission.

Long ago, "Weaver of Coffins" Tis fought a group of Crimson Denizens who had ravaged a human village, destroying them all at once with Pure Coffin. One bear-like Denizen approached, and though he was faced with Tis, he conversed with her Crimson Lord, "Abyssal Ring" Asiz. The Denizen stated that they were simply enjoying themselves in the new land they had gained through guidance, and asked how that could be deemed evil. Asiz explained that the Denizens' wild behavior would cause the Great Calamity to occur, resulting in the destruction of both the Crimson Realm and this world, and therefore Denizens were evil. The bear Denizen argued that Asiz was killing his brethren over uncertain speculation, even reducing himself to being housed inside a tool to do so. Asiz stated that the Denizens couldn't overturn the laws of the world and because they were brethren, he would fix their mistakes, but the Denizen didn't agree, refusing to be content with the endless conflict and suffering of the Crimson Realm. This world was paradise and a release from pain and fear, so he didn't think it was wrong to feed on nourishment and live in joy. The Denizen leapt at three humans in a corner who were still alive, but was easily destroyed by Tis' Pure Coffin. 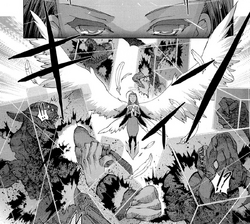 The bear-like Denizen leaping at the humans.

Later, Tis was tearful, but believed that humans weren't mere food for the Denizens, to which Asiz agreed. As she left the village, Tis smiled at the three humans, but they were fearful of her. Asiz told her to drop the "-sama" honorific when addressing him, but she couldn't help it.

With Denizens crossing over to this world and running rampant, the world's balance was beginning to crumble. Crimson Lords who had felt that both worlds would be destroyed because of this formed contracts with humans who desired revenge, with the humans offering them their whole being and allowing the Lord to transfer inside them to become one being. That way, the Lords could act in the neighboring world without causing Distortions. The general name for the contracted former humans was derived from the vision of the Rift Between Both Worlds that they saw when making the contract, a swaying flame. Therefore they were the Flame Haze.

However, Tis had been betrayed and killed by a human army. Enraged at the death of his love, Asiz sealed Tis' corpse with Pure Coffin, devoured the surrounding humans, and used their Power of Existence to resummon himself and manifest. This was a situation that the developers of the "Flame Haze method" hadn't predicted; love between a Lord and a contracted human. That kind of relationship between a Denizen and a human had been observed before but had been largely ignored as just another wild desire of the Denizens. With this event, the Flame Haze side learned for the first time how dangerous those feelings were. 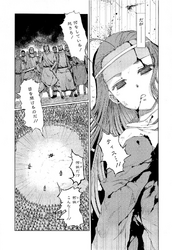 Tis' death at the hands of humans. 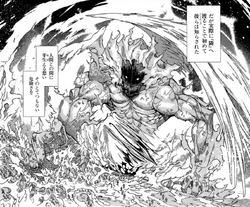 Asiz devouring the humans and resummoning himself.

After eradicating the whole army, Asiz restored Tis' body and swore to get her back, no matter what got in his way. The hero, "Abyssal Ring" Asiz's love was such that he turned his back on his mission. The Flame Haze could not tolerate his actions, not simply for his betrayal, but because if they let him do as he pleased, the very meaning of existence for Flame Haze would be overturned. Denizens feared but also admired Asiz for striving to have his wish granted, as the "affirmation of desires" was everything to them, and it wasn't long before he was no longer alone. Drifting through the Middle East, Asia Minor, and finally Europe, the former hero had become the leader of Töten Glocke, an anti-Flame Haze army who was the greatest enemy to the world's balance. He had changed his true name to "Weaver of Coffins" - to him, it was the name he had had when one with the woman he loved. 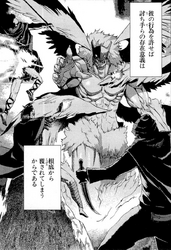 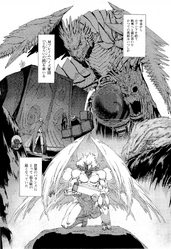 Retrieved from "https://shakugan.fandom.com/wiki/Shakugan_no_Shana_X:_Eternal_Song_Manga_Chapter_22?oldid=34088"
Community content is available under CC-BY-SA unless otherwise noted.