The 21st chapter of the Shakugan no Shana X: Eternal Song manga series.

Nachtigall activated the metal plate pivotal to Asiz's Grand Scheme, the creation of the Heir to Both Worlds.

Nachtigall's voice rang out towards the metal plate, causing the characters carved on it to light up. Asiz was in awe that she could activate the extremely complex Unrestricted Spell Insignias, which he had no clue how to even decipher, with one cry. As Asiz used his flames to break open the coffin with the girl inside, he ordered Nachtigall to use the Unrestricted Spells of "Disintegration" and "Fixation" to weave a thread which would interweave the existences of himself and the girl so that they could be together in this world. Looking at the girl, Asiz thought of her as she had been while alive. The spell would "disintegrate" the girl, an existence of this world, and Asiz, an existence of the Crimson Realm. With their existences interwoven and as one, the spell would "fixate" their combined existence to this world, giving birth to their child, the Heir to Both Worlds. 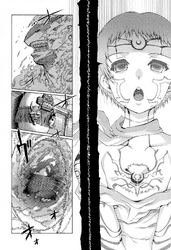 Nachtigall's cry ringing out towards the metal plate. 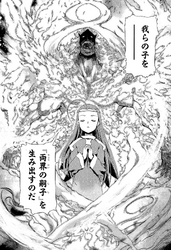 The existences of Asiz and the girl being interwoven.

Mathilde and Wilhelmina were underneath rubble and sensed that Asiz had started his plan. Mathilde broke through the rubble with Knights battering rams. Outside, Wilhelmina could see the fatigue on Mathilde's face. From the fog at the foot of Brocken Fortress emerged Illuyanka, and on his head, Merihim. Wilhelmina then saw Mathilde's expression twist into delight from seeing her foes. Merihim asked Mathilde if she was ready for battle, and she manifested a halberd and quipped back. 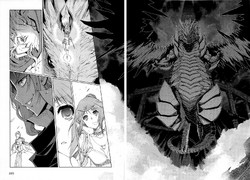 The "Pair of Wings" emerging, and Mathilde's expression. 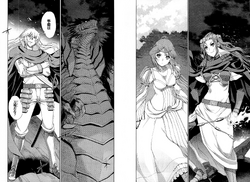 Retrieved from "https://shakugan.fandom.com/wiki/Shakugan_no_Shana_X:_Eternal_Song_Manga_Chapter_21?oldid=34086"
Community content is available under CC-BY-SA unless otherwise noted.