The twentieth chapter of the Shakugan no Shana X: Eternal Song manga series.

Gavida reminisced about his two friends in his final moments. Meanwhile, Asiz began the Grand Scheme.

In Tendōkyū, Gavida, who had been reduced to only his head, reflected on his life of making art with humans, with Tendōkyū among his work. He thanked Mathilde for telling him about the war, as he felt that if he had lived carefree and unaware of it, he wouldn't be able to face Donato in the next life. The next life was a nice delusion, a place where he could have fun with the people he liked. Tendōkyū was a heaven he had made, and many friends had helped him build it. Gavida remembered being at Donato's deathbed, and it was due to Donato's message filled with regret that Gavida was in his current state. 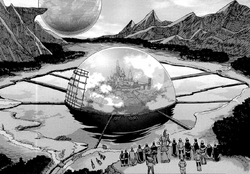 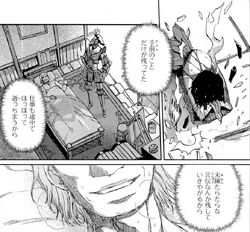 Gavida remembered a time he had been working on his art when his friend, the timid little girl, had appeared before him, crying. He had stopped his work and sat down with her. Gavida wondered if his and Donato's message had reached her. As Gavida began to burn away, he told the girl to realize other's feelings for her, what had resulted from her lethargy, and that humans were quite kind. As he faded away, he told Donato that if the next life really existed, they should drink some ale together.

In Brocken Fortress, Asiz told his Chancellor that his death wouldn't be in vain, and Jarri also paid respect to Molech in his own way. Asiz told Jarri to protect the sky and leave the rest to the "Pair of Wings". Jarri gathered the flies of Sabaeru Kaze around the main tower of the fortress.

Asiz told the girl within Nachtigall that they would get started on the Grand Scheme. He used his flames to raise the Nachtigall birdcage, and within those flames appeared a metal plate with ancient words carved in it, ancient Unrestricted Spell Insignias. Lastly, from a mechanism in the ground emerged a clear coffin with a young girl encased within. As he continued feeding her power, Asiz asked Nachtigall to weave the Unrestricted Spell Insignias. She should be able to activate the two insignias, which were "Disintegration" and "Fixation".

The metal plate with an ancient insignia carved in it. 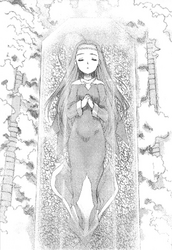 The coffin with a girl inside.

Retrieved from "https://shakugan.fandom.com/wiki/Shakugan_no_Shana_X:_Eternal_Song_Manga_Chapter_20?oldid=33767"
Community content is available under CC-BY-SA unless otherwise noted.