The seventeenth chapter of the Shakugan no Shana X: Eternal Song manga series.

Gavida attacked Chernobog with his hammer, King Briton, but Chernobog disappeared into the shadows before he could strike. Gavida managed to stop his swing as to not damage Tendōkyū. In the darkness, Gavida sensed Chernobog and swung again, but was struck from behind. He discovered that Chernobog had stretched her arm across the room to strike his back. While Gavida got up, Chernobog appeared before him and clawed off one of his arms, the one which held the hammer. Gavida grabbed his severed arm in mid-air and swung it, but Chernobog had disappeared again.

Chernobog grabbed Gavida and slammed him through a pillar, the one pillar he had had trouble placing during Tendōkyū's construction. She kicked him for good measure and the old Crimson Lord crumpled to the ground, defeated. 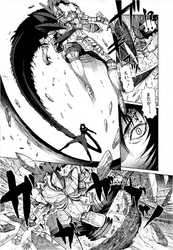 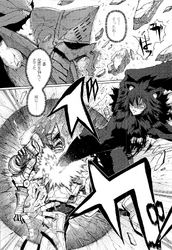 Chernobog stated that she hated apostates like Gavida, and he replied that she must like straight-laced and serious people, causing her to think of Molech. Chernobog grabbed Gavida and called him a fool for laying down his life for humans now, after having devoured many of them in the past. Gavida laughed and stated that she was spouting nonsense, just like her master. He thought of both himself and Asiz as apostates, as both had swapped sides, from an ally to an enemy and vice versa. He again called Asiz by his old name "Abyssal Ring" and Chernobog crushed him with her claw in anger. Gavida asked Chernobog why her master had abandoned his mission as a Hunter and manifested in this world as a Lord, and why he still went by his Flame Haze title, "Weaver of Coffins". He called Asiz mad and pitiful, for he had been entranced by humans, he hated them, but he also still loved them. Chernobog furiously crushed Gavida further, to the point that his body was falling to pieces. Gavida laughed and said that Asiz's foolishness was leading Töten Glocke to the next life which humans believed in. 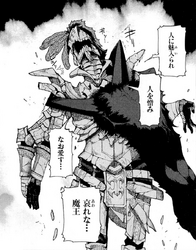 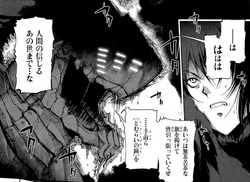 Chernobog threw Gavida to the ground. She believed that Labyrinthos was impregnable, that the "Pair of Wings" would defeat the exhausted "Flame-Haired Burning-Eyes", the Flame Haze forces would be defeated, their master would fulfill the Grand Scheme, and Töten Glocke would be victorious. Though he was threatened by Chernobog, Gavida burst out laughing and voiced his doubts about her predictions.

Retrieved from "https://shakugan.fandom.com/wiki/Shakugan_no_Shana_X:_Eternal_Song_Manga_Chapter_17?oldid=34085"
Community content is available under CC-BY-SA unless otherwise noted.