The fifteenth chapter of the Shakugan no Shana X: Eternal Song manga series.

Gavida, a Crimson Lord who was fond of humans, opposed the methods of Töten Glocke.

4 days ago, the two Flame Haze, who he was acquainted with, had visited him and told him about Töten Glocke's plan. Chernobog then questioned why Gavida had not joined Töten Glocke after hearing of the plan, but he stood and referred to the tray beneath him, Caina. Chernobog knew that it was a Treasure Tool which allowed him to exist in this world without consuming Power of Existence, making it possible for him to be friendly with humans. Gavida was opposed to the plan because it would harm humans, and Chernobog tried to argue, but he brought up the use of City Devourer in Osterode, which killed possibly tens of thousands of people.

Chernobog believed the Grand Scheme was for both Denizens and humans, and remembered a time she had walked with Molech around Brocken Fortress. They had overheard a conversation between some Denizens. They had said that humans would never change with their wars and old traditions, bringing forth calamities. The Denizens believed that Asiz's victory and the Grand Scheme would change the world.

Gavida claimed that Asiz was just doing the Grand Scheme for himself, referring to him with his discarded name "Abyssal Ring", which infuriated Chernobog. Gavida accused Töten Glocke of not caring about humans, though he hadn't come with the intention of protecting humans from them. He had only carried the two Flame Haze to the battlefield in exchange for them delivering his message. Chernobog had heard Mathilde shout the beginning of the message and saw Nachtigall's reaction to it, and believed Gavida knew how to affect her. Chernobog couldn't allow Gavida to live and prepared for battle. Gavida agreed and prepared for battle himself. 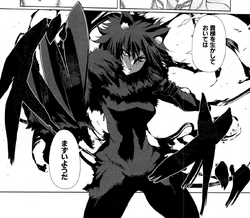 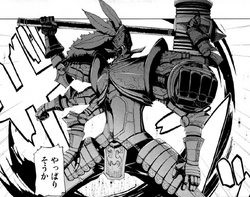 In Brocken Fortress, Asiz continued to pour power into the Nachtigall as Jarri watched. In Nachtigall's thoughts were the names Gavida and Donato. She remembered listening to Gavida telling her off before flying away from him. She had then met Donato, a human, and remembered showing him an Unrestricted Spell, him teaching her his religion, and finally, him discovering her devouring someone. Donato had been furious and she had flown off, scared and upset. Nachtigall wondered how long had passed since then. Though she thought of Donato, she was still motionless. 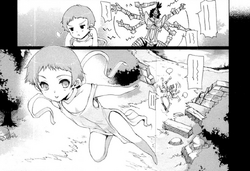 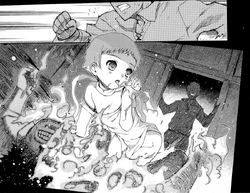 Retrieved from "https://shakugan.fandom.com/wiki/Shakugan_no_Shana_X:_Eternal_Song_Manga_Chapter_15?oldid=34083"
Community content is available under CC-BY-SA unless otherwise noted.