The fourteenth chapter of the Shakugan no Shana X: Eternal Song manga series.

While fighting off Töten Glocke forces within Labyrinthos, Mathilde thought about the goal of the Flame Haze Army and her own way of life.

Charging through the hallways of Labyrinthos on her horse, Mathilde cut through a bat-like Crimson Denizen and exploded a snake-like Denizen. Confronted with many more Denizens, Mathilde summoned halberd-wielding Knights. She dropped down to another hallway, where more Denizens were waiting. Mathilde manifested a shield to defend herself until her Knights followed her down and struck the Denizens from above. One winged Denizen tried to attack Mathilde from behind, but Wilhelmina wrapped it in ribbons and incinerated it. A stone giant approached the Flame Haze and attacked, but Wilhelmina flung it with her ribbons, causing it to crush other Denizens beneath it as it landed.

Mathilde was impressed with Molech's planning, for if the Flame Haze had a war of attrition with all the Brocken Fortress guard Denizens, they would have no chance of winning when faced with the "Pair of Wings" again. Labyrinthos was the perfect Unrestricted Spell for holding them up, and they needed to break through it to get to Asiz quickly. Mathilde also noted that the Flame Haze Army were making a gamble with her plan as she resumed fighting.

The aim of the Flame Haze Army was to stop Asiz's scheme, which they thought was madness, and prevent it from ever occurring. Stopping his plan was a higher priority than destroying him. The moment the plan was completed, destroying Asiz would no longer mean anything, as completing his attempt would change this world. It would become an age of fear for humanity, as there would be Denizens wanting to succeed Asiz who would crudely imitate him. That was why the first implementation had to be stopped and Asiz had to be buried as "a Lord who had harbored a foolish wish and obviously failed". Stopping the plan was also life-and-death for the Flame Haze as after the plan was complete, Asiz would be free to join the battle and the Flame Haze would lose morale. Like the City Devourer Incident 18 years ago, Asiz joining would lead to the Flame Haze Army being decimated and Töten Glocke's victory.

Thinking about losing, the first thing that came to Mathilde's mind was Merihim's proposal of her joining him, which gave her chills. She didn't hate Merihim, but she didn't want to be controlled by anyone. Her life burned for a mission worth risking her life, powerful foes needing defeating, reliable allies, and the power to fight, things which she had lost when she had been human. Mathilde was happy having those things now, as well as having someone, Alastor, who understood her. She would fulfill her mission for Alastor, and that would connect their hearts together. Fulfilling this mission was another path through which she would live through her life, and she would just keep moving forward. Mathilde summoned Knights on horseback to fight the Denizens. She was cut on her face, but smiled in wonder at the path she followed. 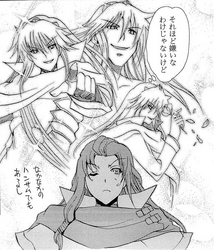 Retrieved from "https://shakugan.fandom.com/wiki/Shakugan_no_Shana_X:_Eternal_Song_Manga_Chapter_14?oldid=34081"
Community content is available under CC-BY-SA unless otherwise noted.