The eleventh chapter of the Shakugan no Shana X: Eternal Song manga series.

Having their own agenda, Bal Masqué began to withdraw from the battlefield upon seeing Labyrinthos. While they explored the interior of the labyrinth, Wilhelmina was anxious about Mathilde's plan.

Bel Peol and Sydonay watched Labyrinthos, which was atop the mountain range above their camp. Sydonay was amazed that Mathilde had used Tendōkyū and assumed that she had taken it from Gavida. "Soaring Tower of Quintessence" Gavida was a Crimson Lord who was fascinated with the art of this world and he was the original owner and creator of Tendōkyū. It was created as part of a pair, the other half being Bal Masqué's fortress Seireiden. Gavida had cooperated with Bal Masqué, but parted ways with them after an uproar caused by an eccentric and had chosen to "retire". Now that Tendōkyū had fallen into the hands of the "Flame-Haired Burning-Eyed Hunter", Sydonay thought that Gavida had been destroyed.

Sydonay remarked that the larger scale of Labyrinthos meant Molech couldn't support it for long, and "Weaver of Coffins" was occupied with pouring his power into Nachtigall and thus couldn't help him. Bel Peol schemed that due to Labyrinthos activating, Brocken Fortress wouldn't be invaded by the Flame Haze too soon, which meant Bal Masqué's plan wouldn't be ruined and they would be able to corner Töten Glocke without reservation. Sydonay teased Bel Peol for her cruelty but she thought of not turning hostile against Töten Glocke as her showing pity on them.

Bel Peol summoned Orgon and informed him that Bal Masqué would withdraw, ordering him to begin moving their army and act as the rear guard. She also summoned Gaap and ordered him to go and inform "Triumphal Cliff" Ullikummi of Bal Masqué's withdrawal. After goading Orgon, Gaap flew away at great speed with his dolls towards Ullikummi. Orgon summoned his Legion and Bel Peol wanted him to use them all for the rear guard, including the "Four Cards"; during the retreat the Flame Haze would think they had the advantage and would attack, and she didn't want any casualties. Sydonay was disappointed that he would only be watching while Bal Masqué was carrying out its Grand Order, but Bel Peol emphasized that she wanted to conceal the Trinity as to not stand out, though she charged him with getting rid of persistent pursuers. Orgon left for the rear with Legion. Bel Peol wished for Töten Glocke to get flustered and rush into starting up their "Foolish Scheme". Though Sydonay agreed with her evaluation of Töten Glocke's scheme, he felt pity for them and their misfortune for being watched by "Arbiter of Reverse Reasoning" Bel Peol. Hecate continued to stand atop the litter with her eyes closed. 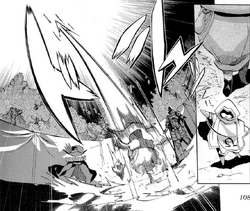 Gaap flying away with great speed. 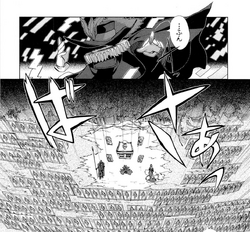 Mathilde and Wilhelmina found themselves inside Labyrinthos, a long stone hallway. They had been separated from the "Pair of Wings" and Mathilde thought Molech had done so to exhaust the Flame Haze and preserve the "Pair of Wings". However, the Flame Haze were inside Labyrinthos, just as they had planned. Mathilde assumed that Merihim was angry that their fight had been interrupted. The hallway in front of them was twisted and distorted. As the pair of Flame Haze walked through the hallway, Mathilde and Alastor surmised that Labyrinthos was an Unrestricted Spell which allowed Molech to control the space inside it. It would allow the space to be manipulated so that they were at a disadvantage and the Nine Eternal Divine Scales were favored. They could also sense Molech's presence due to being inside him. Mathilde had heard that Molech wasn't suited for battles, but that appeared to not be the case. She manifested a sword and shield. Mathilde and Alastor agreed that though it would be a difficult fight, all that mattered was getting to Asiz. This statement upset Wilhelmina, but as Mathilde was apologizing, she had already covered her face with Persona. 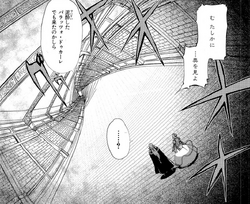 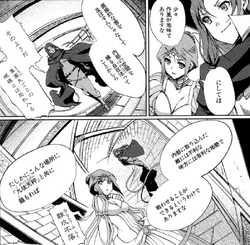 Mathilde and Wilhelmina walking through the hallway.

Wilhelmina remembered when Mathilde had first told her about her plan back at a Flame Haze stronghold. The plan was the only way to not waste time and win in one blow. Wilhelmina had asked her that if they dealt with the Nine Eternal Divine Scales and the "Pair of Wings" quickly and easily and faced Asiz, who had immense power from City Devourer, with all their might, whether the two of them could win without using Mathilde's method. Wilhelmina's expressionless face, like her mask, couldn't hide her emotions from Mathilde. Mathilde had agreed to try and do that, even though the chances of that happening was one in a hundred million. Wilhelmina knew that once Mathilde had decided a method was for the best, she wouldn't hesitate, even if it cost her her life. Not just that, her life had to burn to the fullest or she felt her life had no meaning, and she couldn't forgive herself for not doing that. Wilhelmina had stated that she would fight together with Mathilde, to change that one in a hundred million chance to two in a hundred million. This had made Mathilde happy and she had hugged Wilhelmina.

Retrieved from "https://shakugan.fandom.com/wiki/Shakugan_no_Shana_X:_Eternal_Song_Manga_Chapter_11?oldid=34080"
Community content is available under CC-BY-SA unless otherwise noted.