The tenth chapter of the Shakugan no Shana X: Eternal Song manga series.

Mathilde and Wilhelmina survived the attacks from the "Pair of Wings" and were able to get some separation from them.

As he charged at the Flame Haze, Merihim destroyed the Knights with Rainbow's Heaven Sword. Wilhelmina held back the Wall of Miasmal Screen projectiles with her ribbons. Now at close range, Merihim decapitated the horse Mathilde had been riding. Wilhelmina tried to support her but was blocked by Illuyanka. Certain of his victory, Merihim struck at Mathilde, but just as he sliced through her halberd, Mathilde jumped up behind him. She swung at him from behind with the remaining half of the halberd, but Merihim parried it. Wilhelmina pulled Mathilde away with her ribbons and blocked Merihim's pursuit with the Wall of Miasmal Screen projectiles. Illuyanka broke through them and he and Merihim gave chase to the Flame Haze. 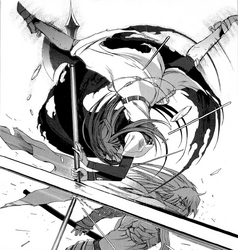 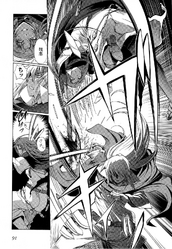 Mathilde attacking Merihim from behind.

Mathilde manifested another horse as she and Wilhelmina headed for Brocken Fortress. As Wilhelmina and Tiamat commented on her near miss, Mathilde revealed that Merihim's last strike had pierced her armor, though she was unhurt. She was glad the "Pair of Wings" had come to face them, as it would be extremely bad for the Flame Haze Army if they had appeared on the battlefield. Alastor stated that the "Pair of Wings" had also been vigilant of Mathilde and Wilhelmina and thus had remained on standby. Wilhelmina and Tiamat agreed that the current situation was satisfactory from a Flame Haze perspective. Mathilde thought her own good luck a moment ago was needed to accomplish their goal, as the Flame Haze Army had entrusted everything to them. Still being chased by the "Pair of Wings", the Flame Haze reached the foot of the Brocken Fortress main tower and saw a blue flame at the top, meaning Asiz, and Nachtigall, were there.

Mathilde shouted the beginning of a message from Gavida, "Donato told me...", directed at the girl within Nachtigall. Upon hearing it, the girl's eyes widened for the first time and some markings on her cheek were dispelled, confusing Asiz. After Mathilde repeated the beginning of the message once more, the space around her, Wilhelmina and the "Pair of Wings" suddenly cracked and shifted. Stone wall structures began to form around them. Wilhelmina secured Mathilde with a ribbon. From outside, the space looked like an ox. It was the Unrestricted Spell Labyrinthos.

The girl showing emotion and the markings on her face being dispelled. 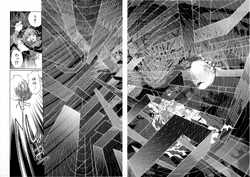 Labyrinthos forming around the combatants.

Retrieved from "https://shakugan.fandom.com/wiki/Shakugan_no_Shana_X:_Eternal_Song_Manga_Chapter_10?oldid=33581"
Community content is available under CC-BY-SA unless otherwise noted.