The ninth chapter of the Shakugan no Shana X: Eternal Song manga series.

Mathilde recalled telling other Flame Haze about her happiness, though they had been unable to understand her. She decided to stop thinking and focus on the battle.

As Mathilde assembled Knights above Merihim and Illuyanka, she thought about what happiness was for a Flame Haze, and for her.

A few years ago, at a certain Flame Haze garrison, Mathilde had been inside the stronghold meeting room watching Karl Berwald training his troops at charging, refusing his adjutant's idea to focus on anything else. While watching them, Mathilde felt that being able to fight was happiness, but the rest of the room went silent from her statement. Pietro Monteverdi thought it amusing, but Mathilde ignored him. Sophie pointed out that though the Flame Haze mission was battles, their motivations were revenge against Crimson Denizens. Yamabe thought of Mathilde's mentality as praiseworthy and impossible for anyone else, intrigued by it. Khamsin Nbh'w also thought of it as strange and Sophie could imagine Wilhelmina's troubles dealing with Mathilde. Samuel Demantius informed Sophie that an army was ready to be deployed near the Mediterranean Sea to await Wilhelmina's return. At that point in time, Töten Glocke had been gathering their army and all Players in Europe were expected to begin moving. The other Flame Haze began discussing plans, leaving Mathilde by herself. She rubbed the Cocytus on her finger, annoyed that Alastor hadn't come to her defense in the earlier discussion. He stated that he didn't like talking about Mathilde in front of others, which made her happy. 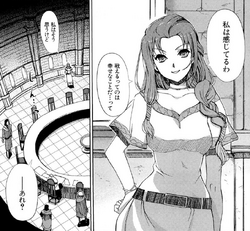 Mathilde telling the other Flame Haze about her happiness. 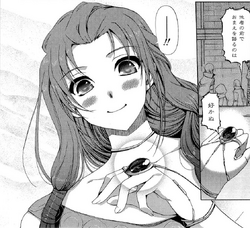 Mathilde reminisced over Alastor's statement and though she was the minority, she stood by her statement of fighting meaning everything to her. Remembering a time Wilhelmina had been upset by her recklessness, Mathilde didn't know what good would come of her concern for Wilhelmina, but wanted to help her. In the end, love was something that was uncontrollable, like it was between herself and Alastor. As she was distracted, she barely dodged several blasts from Merihim. Mathilde decided to not think about it until after they had won the battle. As Mathilde summoned more lance-wielding Knights, Alastor asked if her "voice would reach" but Mathilde deemed that she was still too far.

Mathilde commented that though the "Pair of Wings" were serious, so was she. As Mathilde sent the Knights at Merihim, she wondered whether they were now in the range of the rumored Labyrinthos. She thought that they would have to face the trap eventually anyway, so she wanted to drag the "Pair of Wings" into it as well. Mathilde wanted Labyrinthos to activate, causing Merihim to become restless from her inactivity. Illuyanka fired Wall of Miasmal Screen as projectiles and Merihim rushed at the Flame Haze while riding on one of them.

Retrieved from "https://shakugan.fandom.com/wiki/Shakugan_no_Shana_X:_Eternal_Song_Manga_Chapter_09?oldid=33580"
Community content is available under CC-BY-SA unless otherwise noted.