The seventh chapter of the Shakugan no Shana X: Eternal Song manga series.

Wilhelmina looked longingly at Merihim. She was wearing a dress unsuitable for battle so that Merihim would notice her, but it was to no avail, as he only had eyes for Mathilde. She understood that and cursed him. Mathilde joked that she was disappointed that the two Flame Haze were only received by Merihim and Illuyanka, but got embarrassed when Merihim stared at her. Illuyanka thought it was not the time for games, as they were close to realizing the Grand Scheme, but this didn't appear to be on Merihim's mind. Merihim asked Mathilde if she remembered their promise the other day, the mention of which saddened Wilhelmina. Alastor called the promise "foolish nonsense", which angered Merihim. Mathilde remembered the promise; "the winner can do what they want with the loser". 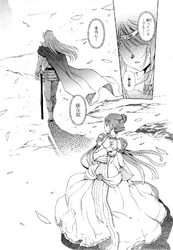 Merihim having no eye for Wilhelmina.

Inside Brocken Fortress, Asiz was still with the Nachtigall. Molech told Asiz that he would depart as well. He tasked Jarri to guard the fortress if something happened to the "Pair of Wings". As he talked, Molech's bones began falling from his body. Molech told Chernobog that once his Unrestricted Spell Labyrinthos was activated, he would send her "there" and she was to deal with the situation. Chernobog berated him for speaking as if these were his dying wishes and hid her concern for him by saying none of it would matter if Töten Glocke was triumphant.

Molech informed Asiz that he would cast Labyrinthos to cover a wider area than usual to insure that the Tendōkyū wouldn't act up again and to try and buy time, but Asiz interrupted him. Asiz stated that he would soon fulfill the scheme and that he would need Molech after it was fulfilled, which Molech felt honored by. Finally, Molech looked upon the Nachtigall and asked her to approve of Töten Glocke's Grand Scheme, choose to support it as a comrade instead of being used as a tool, and then come out of the cage of her own free will. However, she showed no response. After Chernobog's urging, Molech's final bones dispersed and he faded away. Chernobog understood Molech's unease but believed that Labyrinthos was impregnable and he had nothing to worry about. As Labyrinthos spread, Chernobog informed Asiz that she would depart as well, vowing to carry out Molech's instructions. As Asiz told her to rampage, Chernobog was taken away by Labyrinthos.

As he stood on Illuyanka's head, Merihim wanted Mathilde to accept the promise. He said that Asiz would be pleased and Merihim himself wouldn't let the other Nine Eternal Divine Scales complain when he won their battle and Mathilde joined him. Merihim's statements again troubled Alastor and Wilhelmina. Mathilde accepted, saying she wouldn't lose. Though Illuyanka was worried about his partner's behavior, Merihim communicated telepathically that Labyrinthos was being deployed and they needed to distract the Flame Haze until it was complete. This surprised Illuyanka, who felt he was getting old. Illuyanka rushed at the Flame Haze, deploying Wall of Miasmal Screen behind him to protect them, and Merihim attacked with Rainbow's Heaven Sword. Mathilde and Wilhelmina escaped the explosion riding a horse made of flames, which pleased Merihim. Mathilde was also smiling. 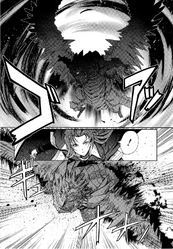 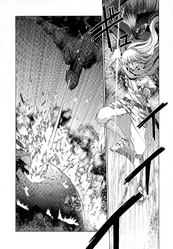 Retrieved from "https://shakugan.fandom.com/wiki/Shakugan_no_Shana_X:_Eternal_Song_Manga_Chapter_07?oldid=33578"
Community content is available under CC-BY-SA unless otherwise noted.