The sixth chapter of the Shakugan no Shana X: Eternal Song manga series.

As Merihim and Mathilde prepared for battle, Illuyanka brought out Wilhelmina.

Merihim and Mathilde locked eyes and prepared for battle. Merihim admired Mathilde and assumed that she had stolen the Tendōkyū from the famous "Soaring Tower of Quintessence" Gavida, cursing the Crimson Lord for his untimely blunder. Mathilde manifested a sword and shield with her flames. She had a brief exchange with Alastor which infuriated Merihim as he drew his own sword.

Illuyanka thought that Merihim was being childish and recounted that Merihim was in love with Mathilde, the enemy, remembering one such battle the two had had. In that battle, Merihim had said that their sword battles were a connection between them, to the annoyance of Alastor and Wilhelmina. Illuyanka thought that the war wasn't only between Merihim and Mathilde, and he fired a concentrated spire-like blast of Wall of Miasmal Screen at the Tendōkyū and Mathilde.

As the spire approached, Mathilde tapped the cracked Crypta with her sword. Suddenly, ribbons twined around the spire and bent it, causing it to crash through a nearby mountain. Pleased, Illuyanka greeted Wilhelmina and Tiamat. Wilhelmina emerged from behind Mathilde, impressed that Illuyanka had recovered from his injuries in a mere 5 days. 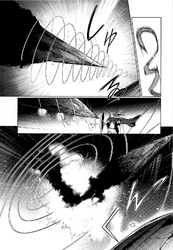 Ribbons bending the spire away. 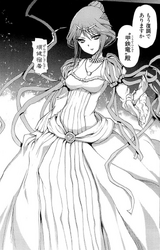 Retrieved from "https://shakugan.fandom.com/wiki/Shakugan_no_Shana_X:_Eternal_Song_Manga_Chapter_06?oldid=33577"
Community content is available under CC-BY-SA unless otherwise noted.