The fifth chapter of the Shakugan no Shana X: Eternal Song manga series.

All parties of the Great War were waiting for the advent of the Flame Haze Army's two trump cards.

A group of Flame Haze were trying to send a message to General Berwald about the state of the war, a deadlock with the other flank of Töten Glocke, but a strange Denizen army was blocking them, maintaining their formation and only retaliating when the Flame Haze attacked. At that army's camp was its 3 commanders, with Bel Peol and Sydonay watching over Hecate as she stood atop a litter with her eyes closed.

Bel Peol asked Hecate if there had been any developments of interest to them, but there hadn't been any yet. Bel Peol was waiting for that development and wanted it to happen before the war concluded. She asked Sydonay for his opinion on the battle now that Sophie Sawallisch had entered the battlefield, and Sydonay teased the Strategist for asking for his lowly opinion. They agreed that not much had changed about the stalemate from Sophie's participation, and the turning point would be when "those two" joined the battle, as this would force out the "Pair of Wings". Both sides' forces would concentrate around them, and Sydonay theorized that Töten Glocke's central army was staying in the front lines and the Flame Haze Army's left flank hadn't advanced after destroying Sokar because both were preparing for that moment. Bel Peol wondered how "those two" would attack, as it was impossible to approach Brocken Fortress without being noticed by the deployed Sabaeru Kaze. Sydonay stated that they would eventually be seen by the flies and have to fight the "Pair of Wings". Hecate's role would come after that.

Atop the nine scales inside Brocken Fortress, Merihim was getting impatient about Mathilde's whereabouts and Illuyanka suggested she and Wilhelmina were planning a surprise attack. Molech thought it was to Töten Glocke's advantage to have a stalemate continue but it was dangerous for Ullikummi, who was fighting alone. Chernobog told him to stop whining and stated that the Nine Eternal Divine Scales had all vowed to achieve the Grand Scheme. Asiz needed more time to grant his wish for the sake of all beings in this world.

Above Asiz was a birdcage housing a little girl, the Nachtigall. The girl was a small Crimson Denizen but had the miraculous power of being able to construct any Unrestricted Spell she wanted. By pouring Power of Existence into the cage, the girl could be controlled from deep within, and as Asiz did so, dark markings appeared on the girl's skin. When the cage could control the girl entirely, it would be able to activate whatever Unrestricted Spell its possessor wanted. However, it required an enormous amount of Power of Existence to make the girl sing, more than an average Denizen could ever gather in its lifetime. Most previous possessors of Nachtigall had recklessly destroyed themselves trying to gather that amount. This was no concern for "Weaver of Coffins" Asiz, who had used City Devourer to convert the whole metropolis of Osterode into Power of Existence and ate it 18 years ago. He could almost fully control the girl after just 5 days and would use her to operate something essential for the Grand Scheme.

Though Illuyanka told Molech to calm himself, he shared Molech's sadness from losing their comrades for over 1000 years in the space of a couple decades. The scales' Werkschale had gotten quite lonely-looking. Illuyanka thought that they may all perish for the Grand Scheme, but it was for a wonderful cause and he couldn't understand why the Flame Haze didn't feel the same way about it. He remembered back to the City Devourer Incident and the Nachtigall Struggle, both being steps towards their victory, achievement of the Grand Scheme. However, two of the Nine Eternal Divine Scales had been slain at the hands of Mathilde and Wilhelmina. Illuyanka believed they would clash with those two again as long as Töten Glocke possessed Nachtigall, but thought they were running late. He saw that Merihim was impatient, wanting to fight Mathilde out of his love for her. 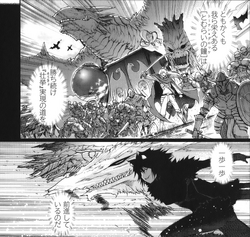 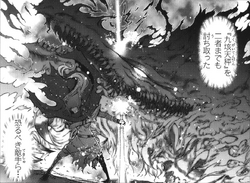 Suddenly, Jarri sensed something, and with Sabaeru Kaze he projected an image of the sky above Brocken Fortress, confusing the others. Soon enough, a massive sphere-like void descended, hurtling towards the fortress in the projection. Merihim charged his Rainbow's Heaven Sword, and after Asiz gave permission for the "Pair of Wings" to face this void, Merihim blasted through the fortress ceiling and flew off, with Illuyanka following him. Outside, the two saw the real sphere-like void plummeting at them with great speed. 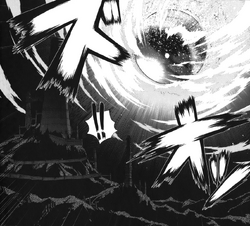 The sphere-like void hurtling towards Brocken Fortress, as depicted by Sabaeru Kaze.

Merihim was pleased, feeling that Mathilde was behind this, and shot his Rainbow's Heaven Sword at the void, blasting a hole in it and revealing it somewhat. However, the speed and trajectory of the void hadn't changed. Illuyanka used his Wall of Miasmal Screen to repel the sphere into the ground away from the fortress. 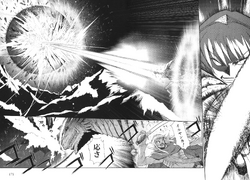 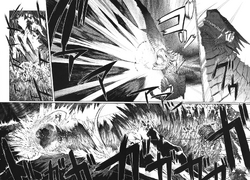 Illuyanka repelling the void into the ground with Wall of Miasmal Screen.

With the sphere now motionless on the ground, Merihim recognized it as the Tendōkyū, a moving fortress Treasure Tool which floated in the sky, with its appearance and the presence of the ones inside concealed by Crypta. It had been missing for decades along with its creator. Illuyanka was in disbelief at the idea of crashing it into Brocken Fortress, but Merihim reminded him that that was the kind of woman Mathilde was. Mathilde stepped out of the hole in Crypta. 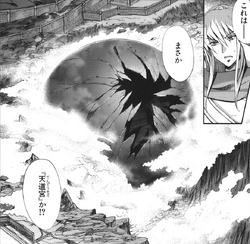 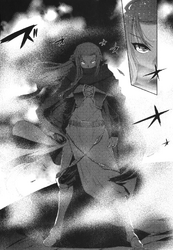 Mathilde stepping out from Crypta.

Retrieved from "https://shakugan.fandom.com/wiki/Shakugan_no_Shana_X:_Eternal_Song_Manga_Chapter_05?oldid=34128"
Community content is available under CC-BY-SA unless otherwise noted.