The fourth chapter of the Shakugan no Shana X: Eternal Song manga series.

The death of Sokar had invigorated Ullikummi and his army. With the Sawallisch Group in danger of being annihilated, Sophie sought to buy them time to regroup.

Ullikummi, enraged from Sokar's death, stomped on the other half of the Flame Haze Army. The Flame Haze retaliated by firing cannons at him, but Ullikummi emerged from the smoke unharmed and ordered his Crimson Denizen army to advance before the Flame Haze could reload. Ullikummi's adjutant Alraune floated above him and asked if he was alright, but Ullikummi stated that he wouldn't be affected by human toys. As Ullikummi told Alraune about how he hadn't liked Sokar, he was struck by a second wave of cannons. He protected Alraune from the cannon fire and emerged from the smoke again, adding that Sokar had also been an irreplaceable part of the Nine Eternal Divine Scales and his comrade. Ullikummi cursed the Flame Haze for what he thought was foolish behavior; killing Denizens over a baseless and vague sense of crisis. He began to use Iron Hammer of Nesa, a vortex which drew metal from the Flame Haze's armor and cannons to himself, meaning the Flame Haze were pulled in along with their armor. The Flame Haze believed they couldn't defeat Ullikummi due to him being impervious to their cannons and Endan, as well as due to the vortex. Ullikummi fired the wave of metal, obliterating the front line Flame Haze and most of the forest, leaving only deep trenches. The Denizens then charged at the remaining Flame Haze. 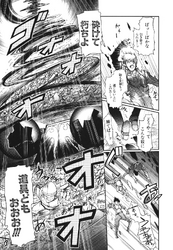 Ullikummi drawing metal towards himself. 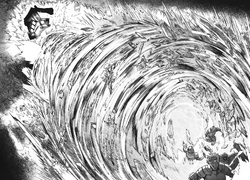 The Iron Hammer of Nesa.

From a cliff, Sophie Sawallisch watched the battle, thinking that Sokar's death had invigorated the Denizens. Ullikummi had destroyed all of the artillery they had been using to slow down the Denizen soldiers. As they returned to their camp, Sophie's Crimson Lord Takemikazuchi praised Ullikummi for quickly seeing through their tactics and using himself as a shield to break through their forces. He claimed that Ullikummi would be harder to deal with than Sokar, but Sophie believed that they had been lucky to defeat Sokar due to his death that day being his first defeat, and that Karl's speed and attacking power coincidentally matched up well against Sokar's personality and defensive lines. Sophie returned to the table, where Alex, Denis and others were looking at a map of the battlefield and current state of the war.

In order to encircle Brocken Fortress, the Flame Haze Army had split in two, with the Sawallisch Group attacking from the left flank and the Berwald Group attacking from the center. On the left flank, Ullikummi had just destroyed the right side of the Sawallisch Group and was advancing. Meanwhile, the Berwald Group had destroyed Sokar but their vanguard had been annihilated, forcing their retreat. The remnant forces of Sokar's army had joined Ullikummi. Töten Glocke had forces on the right flank, but they hadn't engaged in battle yet.

Sophie pondered that though Töten Glocke was facing an unprecedented number of hunters, they had chosen not to hole up in their castle but to instead battle them at the foot of the mountain with almost their whole forces. She thought that the war wasn't going well, but Takemikazuchi said that Sokar's death was a result of her strategy. The Flame Haze Sophie had gathered were not like the heroes of 18 years ago; they had gathered many hastily contracted Flame Haze amateurs in order to have the numbers needed to fight Töten Glocke. She wondered how many had already died, but Alex and Denis assured her that the Flame Haze were putting up a good fight. They were using artillery, thought to be powerless against Denizens, to at least slow them down, and their "Power Difference Attacks" of making the Denizens careless by using just guns then blowing them away with cannons was also effective. Flame Haze could easily carry cannons around, and when their artillery ran out, they would use Endan. So far, they had kept the enemy back and were waiting for chances to strike back. Sophie stated that by bearing just two attacks, Ullikummi had figured out the Power Difference Attacks and how to defeat it, and had done so.

Ullikummi and his forces had almost wiped out the right flank of the Sawallisch Group, and with it gone, it would be easy to attack the forces in the center, where Sophie was. Sophie thought that the situation was dangerous; the Flame Haze were all new and disorderly and lacked cooperativeness. Unable to reorganize their formation in time, they would be slaughtered by Ullikummi. Unlike previous battles, they needed to win this war. She told her troops that she would enter the battle, shocking them, with Takemikazuchi objecting to the Supreme General entering the battle. Sophie stated that she was the only one who could reach the right flank quickly enough, get the Flame Haze to hold their ground, and hold off Ullikummi to buy enough time for the army to change formation. No one objected to Sophie's explanation. Sophie ordered Denis to pick out Unrestricted Spell Masters to set up Long-distance Communication, allowing communication between the Sawallisch and Berwald Groups. She also ordered Alex to organize their central forces while she fought. Sophie wondered how long she could hold out, but Takemikazuchi stated that she must hold out, and even if her plan worked, it would only return them to a level playing field, a testament to the strength of Töten Glocke.

The primary goal of the Flame Haze Army wasn't to exterminate Töten Glocke but to stop "Weaver of Coffins" Asiz's plans, what the Denizens called the Grand Scheme. The war was simply necessary to do that, and their job was to hold down the main forces lead by the two Front Line Army Generals, "Triumphal Cliff" Ullikummi and "Barrier of Burning Dust" Sokar. Töten Glocke was organized under their leader, Asiz, and the Nine Eternal Divine Scales, 9 powerful Crimson Lords who controlled their forces. However one had been destroyed in the City Devourer Incident 18 years ago which started everything, and one had been destroyed 5 days ago, in the battle over a Treasure Tool which initiated the Great War. With Sokar destroyed after the current battle commenced, only 6 of the 9 remained. Of the 6, the Stealth Operations Commander "Trickle of Darkness" Chernobog, the Great Scout "Villainous World's Spawn" Jarri, and the Chancellor "Great Embracing Furnace" Molech most likely wouldn't fight, along with Asiz, who was busy with the Grand Scheme. If some reinforcements only participating out of obligation were excluded, what the Flame Haze had to worry about as the war progressed was the actions of the remaining two, "Rainbow Wings" Merihim and "Ironclad Dragon" Illuyanka. The two held tremendous power and could turn the tide of battle, but they had secluded themselves in the fortress due to being exhausted from the battle 5 days ago, and because their opponents that day, Mathilde Saint-Omer and Wilhelmina Carmel, the two trump cards of the Flame Haze Army, hadn't shown themselves either. Takemikazuchi thought that with Sokar's death, the battle would change soon. The two trump cards had battled against Merihim and Illuyanka for 18 years, and in the battle 5 days ago, Mathilde had destroyed Merihim's Aeria Rinne forces, a sizable amount of his strength, with her Knights, while Wilhelmina had also heavily wounded Illuyanka with her ribbons. Nevertheless, that battle had ended in Töten Glocke acquiring the Treasure Tool and the deaths of many powerful Flame Haze, a defeat for the Flame Haze Army. Merihim and Illuyanka would stay to defend Asiz, who wanted to implement his plan at Brocken Fortress, until the two Flame Haze show up.

Sophie made a sign of the cross with her lightning and prayed to herself before flying into the sky engulfed in lightning, inadvertently wrecking the Flame Haze camp. As Sophie flew towards Ullikummi, Jarri's Sabaeru Kaze flies blocked her way, but she easily blew past them. Sophie struck the middle of Ullikummi's body with her thunderbolt kick.

Retrieved from "https://shakugan.fandom.com/wiki/Shakugan_no_Shana_X:_Eternal_Song_Manga_Chapter_04?oldid=33575"
Community content is available under CC-BY-SA unless otherwise noted.