At the start of the 16th century and with the Great War looming, the Flame Haze Mathilde Saint-Omer and Wilhelmina Carmel are tasked with taking down the thus far independent Crimson Denizen army Minack.

In Europe during the beginning of the 16th century, when the Fūzetsu hadn't come into existence, there was a big war. Afterwards it came to be known as the Great War; it was big, but was concealed from human history. This is the story of the fierce clash between the Crimson Denizens, invaders from another world who were greedily doing as they pleased in this world, and the Flame Haze, their superpowered hunters.

On a cliff, a knight and a princess were atop a horse made of flames, watching a large bird flying down into a stronghold. The leader of the stronghold, "Melodic Pedestal" Gogmagog, talked with the bird, "Halcyon Flight" Stolas, believing that the decisive battle at "that" mountain would begin soon and that Stolas's master wanted his forces to reinforce them. Gogmagog didn't think the disorderly Flame Haze were a big deal and hadn't received any such request from Töten Glocke, the primary opponents of the Flame Haze, but Stolas informed him that the Flame Haze had formed a proper army. Gogmagog agreed to assist them, but needed to be bribed with a reward concerning the Sovereign's Game. The stage they were standing on began to move and Stolas was shaken off. Gogmagog vowed to make the Great War interesting. 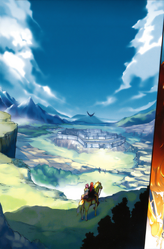 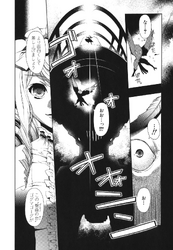 Gogmagog atop the moving stage.

On the cliff, Mathilde and Wilhelmina observed the Minack stronghold. All Denizens in Minack's sphere of influence had been gathered like they had expected, but they weren't mobilized yet and Wilhelmina and Tiamat suggested attacking now. Mathilde and Alastor agreed and Mathilde manifested a halberd made of flames and mounted her horse. They charged at the first gate of the stronghold, which was guarded by around a dozen Denizens.

One Denizen, who had just lost their arm, fell down to the stage to inform Gogmagog that attackers had destroyed their southern base. Though Stolas had not sensed a presence while flying there, the Denizen told them of the two attackers. Gogmagog ordered the entire army to mobilize and told the Denizen that he would crush any troops who fled from the battle, and the Denizen left to relay his orders. Stolas agreed with Gogmagog that the two attackers were the Flame Haze assassins who were targeting Players of the Sovereign's Game, Mathilde Saint-Omer and Wilhelmina Carmel, who Stolas's master had said would be key factors in the war. Stolas offered to help but Gogmagog declined and put two Denizen guards on him. Gogmagog looked forward to facing Mathilde.

As they battled the Denizens, Mathilde and Alastor were impressed by Gogmagog's leadership for the army's quick recovery after the Flame Haze's initial attack. Wilhelmina noted that the Denizens were more desperate than when the fight began, and Mathilde thought that Gogmagog threatened them. With hundreds of Denizens in their way, Mathilde summoned Knights to combat them. Though momentarily overwhelmed, fear of Gogmagog inspired Minack to keep fighting. Mathilde said she would get serious and charged Wilhelmina to protect her back. Wilhelmina donned Persona. Since Knights only operated within the range of Mathilde's perception, Wilhelmina engaged in battle against a unit of Denizens riding on large quadrupedal Denizens outside this range. She easily and gracefully dodged them and tripped and flung away the whole unit with her ribbons. Mathilde was distracted watching Wilhelmina and Alastor had to warn her of two Denizens above her. She barely dodged their spears, killed them with a manifested sword, and landed back on her horse, albeit with movements not as graceful as Wilhelmina's. 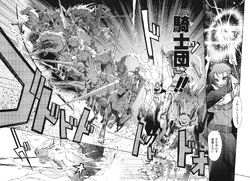 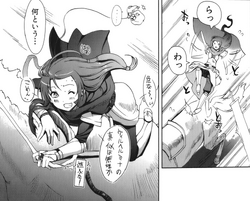 From a stronghold tower, Stolas watched the battle, amazed by Mathilde's Knights, which were believed to each be as strong as an average Flame Haze. Mathilde and Wilhelmina were also uninjured and they were easily dealing with the elite soldiers of Minack, who were dominant in Northern France.

Minack had retreated and were now guarding the castle as Mathilde and Wilhelmina came together. To Stolas's amazement, Mathilde formed a battering ram and broke through the castle wall. Mathilde dismounted her Knights to form units with them to siege the castle; one with swords, one with spears, and one with bows. Mathilde commented on the large number of soldiers in the Minack army, which Wilhelmina thought was natural given that "Melodic Pedestal" was a big-shot in the Sovereign's Game.

Mathilde recalled a Flame Haze Army meeting where Denis was explaining the Sovereign's Game; Denizen proxy wars using human countries and counties as "pieces". The problem was that if the Denizen organizations playing the game were attacked by Flame Haze, it was possible that they would form an alliance and overwhelm the Flame Haze Army. Sophie reminded the group that their mission wasn't simply the usual Flame Haze mission, but to kill "Weaver of Coffins" Asiz, the ringleader of Töten Glocke who "devoured" Osterode 18 years ago. Anticipating a great battle with Töten Glocke, Sophie had tasked Mathilde and Wilhelmina with dealing with surrounding organizations that might get in the way.

Mathilde asked Wilhelmina to deal with the exterior stronghold, as she would go inside. She thought she would be fine going in alone, thinking Gogmagog wouldn't be as skilled as Töten Glocke's leaders, the Nine Eternal Divine Scales. As Mathilde left, Wilhelmina was distracted by thoughts of Merihim and was surrounded by Denizens before regaining her focus.

The inside of the castle was like an underground temple, with all passages leading downwards. As Mathilde reached the bottom, Alastor warned of a large and dense presence. Mathilde entertained the idea of going back to get help from Wilhelmina, but was fine with just Alastor. At the center of a stage, Gogmagog greeted her. Denizens suddenly flanked Mathilde and she swung her sword at them, but they were only illusions. Gogmagog shot fireballs at Mathilde, who dodged them. A large mechanical puppet approached Mathilde and though she thought it was another illusion, it was real and struck her, but she blocked the blow with a shield. Mathilde repelled more fireballs and Gogmagog lost sight of her in the explosions. Mathilde appeared above him and slashed through him. The slash seemed ineffectual and the stage began moving. Mathilde was swatted to the ground by a giant hand. 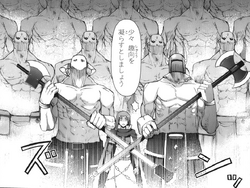 Atop his giant stone body, Gogmagog's female body, which was really a puppet, believed that Mathilde was exhausted from fighting his army outside, and he had thus already won their battle. Mathilde summoned Knights to protect herself from the giant's punch. Unfazed from the attack, Mathilde boasted that she couldn't be beaten by a pretender like Gogmagog, who willingly sacrifices his soldiers and castle for victory. A furious Gogmagog attacked again but Mathilde destroyed his fist using 3 battering rams. Mathilde rose above the giant stone body and used her Knights' Vorpal Phalanx attack to cleave through it. However the damage was not deep enough, and Gogmagog proclaimed his victory. There was no time for Mathilde to dodge a blow from the giant. Ribbons stopped the giant's punch and Mathilde flew down to the Gogmagog puppet and cut through it. Gogmagog was in disbelief that Mathilde, the contractor of the Demon God, had accepted Wilhelmina's help, but Mathilde argued that her comrade had helped her because she lived in a way that caused comrades to want to help her. The two Flame Haze walked away as Gogmagog's two bodies disintegrated. 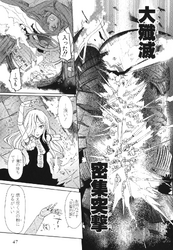 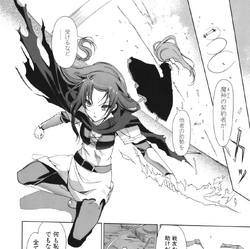 At a Töten Glocke meeting, Molech relayed a message from Bal Masqué's Herold Stolas that Minack had been destroyed, after 5 other organizations had been destroyed recently. Töten Glocke could no longer expect reinforcements from the east, north, and north-east regions. Sokar commented that surrounding the Flame Haze Army with Players was Bel Peol's pipe dream from the start and that their fortress was impregnable. Ninurta stated that underestimating the Flame Haze was what lead to Gogmagog's defeat, but Sokar feigned not hearing him. Asiz told them to stop their bickering, reminding them of what happened to Huwawa. They couldn't lose any more members, and needed to accomplish Asiz's Grand Scheme and usher in the new world.

As they were leaving the Minack stronghold, Mathilde required Wilhelmina to support her walking due to her exhaustion, which wasn't like her. Alastor vouched for Gogmagog's strength, but Mathilde thought that she couldn't be exhausted from this, a skirmish before the main event. Mathilde feigned a recovery and wanted to return to Sophie, but asked for more rest when Wilhelmina suggested summoning a horse.

Community content is available under CC-BY-SA unless otherwise noted.