Shakugan no Shana X: Eternal Song -Harukanaru Uta- (灼眼のシャナX Eternal song -遙かなる歌-?) is the second manga under the Shakugan no Shana manga franchise, with illustrations by Shii Kiya. Its story is based on the events of volume X of the light novels and it began serialization in the seinen manga magazine Dengeki Black Maoh on September 19, 2007, published by MediaWorks. Later, Eternal Song was moved to be serialized in Dengeki Maoh.

The events in Eternal Song focuses on the events of the Great War, with a certain focus on two Flame Haze, the previous "Flame-Haired Burning-Eyed Hunter" Mathilde Saint-Omer and "Manipulator of Objects" Wilhelmina Carmel. They were famous as the counterpart of the Crimson Lord duo called as "Pair of Wings", "Rainbow Wings" Merihim and "Iron-clad Dragon" Illuyanka. Their adventure starts in the middle of the Great War, an event of great turmoil between Crimson Denizens and Flame Haze and a period of great activity between the two factions.

The first 3 chapters of Eternal Song are the only chapters not taken from the tenth novel. They give more details about events before the start of the last battle at Brocken Mountain where most of the major battles occurred. From the end of chapter 3 onward, after the death of Sokar and Mathilde's group entering the battlefield, the story follows volume X closely.

Eternal Song began serialization in the first issue of the quarterly manga magazine, Dengeki Black Maoh. After having 8 chapters published in 9 issues, the manga was moved to Black Maoh's parent magazine, the monthly magazine Dengeki Maoh, for the rest of its publication. Black Maoh was discontinued 3 issues after Eternal Song moved. Eternal Song was featured once on the cover of Black Maoh. 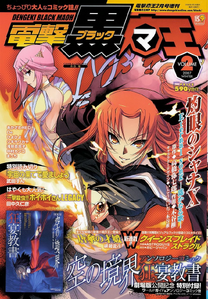 The cover of the second issue of Black Maoh

Retrieved from "https://shakugan.fandom.com/wiki/Shakugan_no_Shana_X:_Eternal_Song?oldid=34518"
Community content is available under CC-BY-SA unless otherwise noted.