Back to page
Edit

LN Volume I Prologue
The Prologue is the introductory chapter to the Shakugan no Shana manga series.

A narration explained that inhuman beings, dubbed "Crimson Denizens" by a poet long ago, were rampant in the shadows of this world. The Denizens had crossed over from a world which was right next to this one but unreachable by walking. They referred to their world as the "Swirling Cathedral", and the poet called it the "Crimson Realm".

The Crimson Denizens manifested themselves in this world and brought forth impossibilities by taking humans' source of life, Power of Existence, and did as they pleased until they would eventually perish. Humans who had been devoured by Denizens would cease to exist, and the loss of their existences, which were meant to continue spreading and connecting with the world, create Distortions. The Distortion of the world accelerated and powerful Denizens known as Crimson Lords began to worry about a Great Calamity which would one day befall this world and the Crimson Realm.

Some of the Crimson Lords decided to hunt their brethren using Flame Haze, humans who wished for revenge against Denizens and had offered themselves as Vessels to the Lords. Though they were hunted by the Flame Haze, Crimson Denizens still lived on in this world. 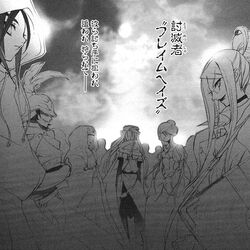 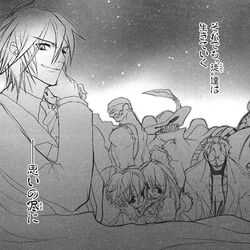 A high school boy, Yūji Sakai went into a bookstore. He dropped a book while inside, and was surprised by what he saw as he was leaving.