Claw and Fangs of Violation IV

Claw and Fangs of Violation IV (蹂躙の爪牙 IV, Jūrin no Sōga IV?) is the 38th chapter of the Shakugan no Shana manga series.

Margery recalled her tragic past and her desire to get revenge on The Silver.

As Margery fell, she thought that Shana was looking down on her, and herself as pathetically lying on the ground. After landing, Margery was still conscious but severely wounded and immobile.

Margery remembered back to a time when she was severely injured and without hope. She had never had anything that was important to her, and everything had been stolen from her, but she had lived on. Margery had vowed to destroy, kill, steal from, and above all sneer at the noblemen who had taken everything from her. She had endured hardships for a long time to carefully plan her revenge with other prostitutes and slaves. Margery had gotten close to the noblemen, and just as she was about to kill them with a hidden blade, the building they were in suddenly exploded. 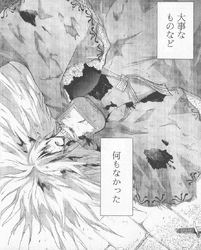 Margery after losing everything. 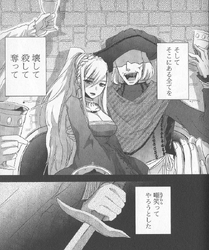 Margery about to get her revenge.

The explosion was caused by the silver armor. It knew everything about Margery, and showed her the people who had stolen everything from her, who were everything to her, and made them cease to exist. Margery was dying and had nothing left, and the armor was sneering at her. Overcome with rage, Margery wished to destroy everything about the silver armor. Her cry was heard by the Crimson Lord Marchosias, who thought of her as an empty vessel, a goblet. He manifested as an ultramarine wolf in front of her and told her to call out for him. Margery called out, and was reborn as a Flame Haze. 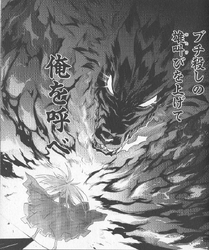 Marchosias revealing himself to Margery. 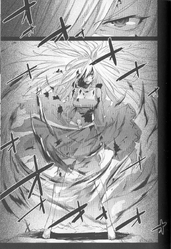 Margery reborn as a Flame Haze.

Shana was flying with Yūji and Lamies above the Misaki Atrium Arch when a burst of flame erupted out of the smashed ceiling. The three landed and saw a gigantic ultramarine wolf rise up from the building.

Retrieved from "https://shakugan.fandom.com/wiki/Shakugan_no_Shana_Manga_Chapter_38?oldid=31884"
Community content is available under CC-BY-SA unless otherwise noted.