The Shakugan no Shana anime series was first published by Toshiba Entertainment, which later changed their name to Showgate. Except for the Shakugan no Shana S OVA series and the third season, which were published solely by Geneon Universal Entertainment, all DVDs were published by Showgate and distributed by Geneon. All the DVDs for the S OVA series and third season were also released on Blu-ray.

Shakugan no Shana The MovieEdit

A storage box was released with Final Volume V, which is designed to house the last 4 volumes of -Final-. 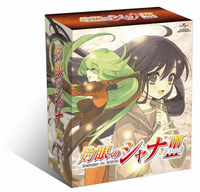 Retrieved from "https://shakugan.fandom.com/wiki/List_of_DVD_Releases?oldid=34562"
Community content is available under CC-BY-SA unless otherwise noted.