Funimation (formerly known as Funimation Productions and Funimation Entertainment, and usually stylized as FUNimation) is an American entertainment company that primarily distributes anime for the United States and international markets.

FUNimation took up the manufacturing, marketing, sales and distribution rights for the Shakugan no Shana anime series after Geneon withdrew from the North American market, though Geneon still retained the license.[1]

FUNimation released the first season of the anime many times, retaining the dub produced by Ocean Group under Geneon's license. They later acquired the license and dubbed and released the rest of the series using a new cast due to a 2-year long delay. All of the FUNimation releases use the Shakugan no Shana English logo that was developed by Geneon.

Shakugan no Shana The MovieEdit 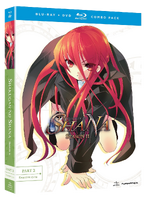 Retrieved from "https://shakugan.fandom.com/wiki/FUNimation?oldid=25233"
Community content is available under CC-BY-SA unless otherwise noted.