The game is a turn-based fighting game in which the player's team of 3 characters fight another team.

Shana is a playable character in the game. An alternate skin of Shana wearing a kimono is also playable, with her fighting moves having slightly different special effects.

Like in Fighting Climax, Shana's skills are Crimson, Hien, and Kessen Ougi. She has four "cross skills" she can do with other characters, "Tendou Palace's Flame Haze" with Wilhelmina Carmel, "Cutest Girl Group" with Mikoto Mikasa from Toaru Majutsu no Index, "Girls with Special Effects" with Erio Tōwa from Denpa Onna to Seishun Otoko, and "World Order Protector" with Yukina Himeragi from Strike the Blood. "Cutest Girl Group" and "World Order Protector" cost 6 skill points, whereas the other two cost 4.[3]

Illustration of Shana wearing a kimono. 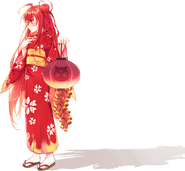 Add a photo to this gallery

Retrieved from "https://shakugan.fandom.com/wiki/Dengeki_Bunko:_Crossing_Void?oldid=34134"
Community content is available under CC-BY-SA unless otherwise noted.